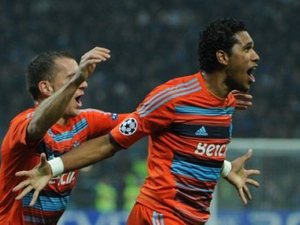 Brazilian substitute Brandao scored in injury time to send Marseille into the last eight of the Champions League for the first time since winning the competition in 1993 as they ousted Inter Milan.

Inter won the second round, second leg match 2-1 at the San Siro after a hectic finish in which Marseille goalkeeper Steve Mandanda was sent off giving away a penalty even later in injury time.

Giampaolo Pazzini, who was brought down by Mandanda, dispatched the spot-kick with the last kick of the match to give the Italians victory but they still went out on away goals.

Diego Milito had earlier given Inter the lead 15 minutes from time and the match looked to be heading into extra-time until the eventful three minutes of injury time.

Almost everything in this last 16 tie happened in injury-time with Andre Ayew giving the French victory in the first leg three weeks ago with a last-gasp goal at the Stade Velodrome.

"I'm very happy because we've had a happy ending, it's emotional," he said.

"We had a really top quality team in front of us and it's true that Mandanda kept us afloat in the first half.

"We conceded 15 minutes from time but it probably didn't change anything, we knew we could concede because we needed to score.

"We've had a difficult period recently but the noise made by the people who came here made me very proud.

"It was a great pleasure to see them believe to the end. You can talk of luck but that's football, until the final whistle is blown anything can happen."

Inter coach Claudio Ranieri may well be searching for a new job after this defeat with his team out of contention for silverware and facing an uphill battle in the league just to qualify for Europe next season.

Ranieri blamed defeat on a lack of luck.

"This match is a picture of our season, we played better than Marseille and even tonight we had the clearer chances," he said.

"Over 180 minutes Marseille had three shots on goal but in football the team who wins is the one that scores, so well done to them.

"This year we haven't had any luck, I can't ask the team for more."

"We need to keep giving everything and we'll see what we can do in the league.

"We could have done more with that touch more luck that really seems to not want to arrive.

"We were unjustly condemned, but that's the beauty and the beast of football and you have to accept it."