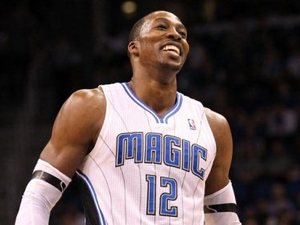 Dwight Howard, the major subject of transfer talk as the NBA trade deadline nears, scored 24 points and grabbed 25 rebounds to lead the Orlando Magic over Miami 104-98 in over-time.

Jameer Nelson on Tuesday added 25 points, including two layups late in over-time, while J.J. Redick scored 17 points and Ryan Anderson had 16 points and 12 rebounds as Orlando won for the second time in three games with Miami this season.

"We're a great team when we play together and play hard," Howard said. "We did that tonight and we have to do that every night. I'm happy we're playing like this. We just have to keep this going."

The Heat will have a chance to avenge the loss at home on Sunday against the Magic but by then Howard -- who enjoyed his eighth 20-point, 20-rebound night of the season -- might be playing elsewhere.

Howard has made no secret that he wants to play for a contender and would like to see Orlando make some moves to strengthen the lineup to compete with powerhouse clubs like Miami and Chicago.

But the All-Star center has been linked in various reports to a handful of clubs and remains with the Magic, who can offer him the most money in a new contract and assemble talent around him as well.

With Thursday's NBA trade deadline nearing, Howard's performance could have been his last with the Magic, but he said his only plans for the next two days were "just play basketball and have fun" instead of ponder trade distractions.

"Despite everything that is going on the guys have played well," Nelson said. "My job is to play as hard as I can no matter who is on the court.

Miami led 56-45 at half-time, thanks in part to 11 points by Wade in the first quarter and a 29-15 Heat edge in the second quarter. But the Magic battled back and pulled level at 94-94 to force over-time.

"Our defense was great in the second half," Howard said. "We got back and we didn't turn the ball over as much."

Howard outfought James for a rebound to set up a Nelson layup with 1:34 to play and, after an offensive foul on Miami's Mario Chalmers for charging into Anderson, Nelson made an underhand scoop layup off the backboard while evading a Bosh block attempt to give Orlando a 102-96 lead with 55 seconds to play.

Wade made a layup to pull the Heat closer and Howard missed four free throws that allowed Miami to remain within striking distance, but James missed two 3-point shots and Wade missed another and Redick sank two final free throws to secure the victory.