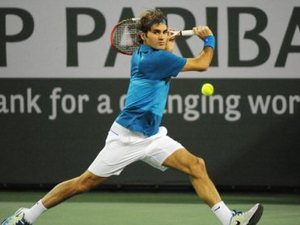 Rafael Nadal breezed into the fourth round at Indian Wells on Tuesday where he was joined by Roger Federer who had to dig deep to fend off rising star Milos Raonic in three sets.

Where world number three Federer had to come from behind to beat Canada's Raonic 6-7 (4/7), 6-2, 6-4, his Spanish rival cruised by Marcel Granollers 6-1, 6-4, to extend his winning run against his compatriots to 10 matches.

Nadal will face Alexandr Dolgopolov in the fourth round of the hardcourt tournament in the California desert.

In the women's draw, defending champion Caroline Wozniacki saw her bid for back-to-back titles fail as she was dumped out 6-3, 6-2 in the night match by former world number one Ana Ivanovic.

Federer also appeared to be facing an early exit after losing the first set to Raonic.

But the 30-year-old Swiss, who won three straight Indian Wells titles from 2004-2006, came back to take the next two sets and continue a strong run of form that has seen him take consecutive wins in Rotterdam and Dubai.

Federer, who was facing the 21-year-old Raonic for the first time, said he had a difficult time adjusting early to what the hard-serving Canadian.

"It was a difficult match," Federer said. "I have never played him before. He has probably seen me play a whole lot on TV which helps him out a bit."

Federer hammered 10 aces and won 88 percent of his first-serve points in the two hour, seven minute match, and afterwards expressed pride in the comeback.

"I hung in there and played great in the second set. The third set was close and I am glad to be moving on in this tournament," he said.

Raonic, who already has two titles this season, showed why he is considered one of the rising stars on the ATP Tour, earning the praise of his opponent.

"He is going to be a future top 10 player and a whole lot better. He did very well tonight under pressure," Federer said.

Despite the loss, Raonic said he still enjoyed being on center court against the 16-time Grand Slam winner.

"I was there competing with what people say was the greatest player of all-time," Raonic said.

Federer will face Thomaz Bellucci of Brazil in the fourth round, who moved progressed after Russian Nikolay Davydenko pulled out with a virus.

Nadal has been a model of consistency in Indian Wells and is the lone player in the last six years to have reached the semi-finals or better each time.

He hit four aces and won 79 percent of his first serve points in the 87 minute match against Granollers.

"I think I did very well in the first set," the two-time Indian Wells champ said. "In the second I didn't play my best. I stopped moving my legs and and in the end of the set I got into a bit of trouble but I am happy I finished the match well," Nadal said.

On the women's side of the draw, top seed Victoria Azarenka extended her winning streak this year to 20-0 by beating Julia Goerges 6-3, 6-1.

Azarenka advances to the quarterfinals where she will play number five seeded Agnieszka Radwanska.

Defending champion Wozniacki crashed out of the tournament after losing to the 15th seeded Ivanovic.

The win leaves her (2008) and Maria Sharapova (2006) as the only former Indian Wells champs left in the women's draw.

"I tried to fight and do my best but sometimes that is not enough," a deflated Wozniacki said.