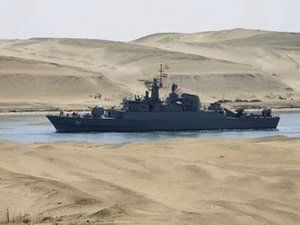 Two Iranian warships that have sailed from the Suez Canal into the Mediterranean are carrying advanced missiles to Hizbullah, Israeli sources told Maariv daily.

The sources said in remarks published in the Israeli daily that the warships are carrying missiles, arms, ammunition and night-vision goggles to Hizbullah in Lebanon.

However, Iran’s Ambassador, Ghazanfar Roknabadi, denied that the ships were carrying arms to Hizbullah.

The Iranian ships are headed for a training mission in Syria.

Israeli security officials told the Associated Press that as long as the ships remain in international waters, there is nothing Israel can legally do.

In Damascus, officials at the Iranian embassy said it would mark the first time in years that Iranian naval vessels dock in a Syrian port. The ships were heading for Latakia, about 600 kilometers from the canal, a voyage of about a day.

They paid about $300,000 in fees for the canal passage, according to a maritime agent.