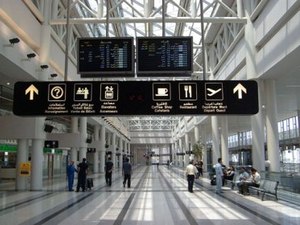 A private Libyan jet that was prevented from landing at Beirut airport was carrying on board the Lebanese wife of one of Libyan leader Moammer Gadhafi’s sons, Voice of Lebanon radio reported Wednesday.

VDL said Hannibal Gadhafi’s wife, who is from the Skaff family, and several members of the ruling family were aboard the jet that Lebanese aviation authorities refused to give the permission to land at Rafik Hariri international airport on Tuesday.

Several Libyan regime figures could have been among the plane’s passengers, the radio station said.

As Safir daily said Tuesday that the plane was due to take off from Tripoli’s airport before midnight but Lebanese authorities asked Libya to unveil the identity of the 10 people on board before allowing the jet to land in Lebanon.

When the Libyans ignored the Lebanese request, authorities in Beirut ordered airport officials to ask the pilot to divert the plane to a nearby country, either Syria or Cyprus.