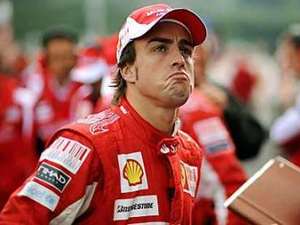 Ferrari driver Fernando Alonso says the team still expects to fight for the Formula One title this season despite acknowledging the scarlet cars are likely to struggle in the season-opening Australian Grand Prix this weekend.

Alonso said Thursday that this year's car is still not a finished product heading into Friday's first practice session and that the team is behind the likes of Red Bull and McLaren in development.

However the Spaniard said the legions of Ferrari fans should not give up hope quite yet.

"We are not 100 percent, there is more to come from this car and it will come hopefully soon," Alonso said. "The team is very, very motivated for the championship, very ambitious, all the members of the team.

"Maybe we are not as quick as other teams in this race, but we want to be champions in November," he added. "This is like the Tour de France. There are 20 stages and this is the prologue, the time trial stage."

When Alonso made the switch from Renault, where he won two world championships, to Ferrari it was in the expectation of joining a dominant outfit, but after a competitive 2010 in which he went to the last race still in the title fight, the team was well off the pace in 2011.

Last year the team was uncompetitive from the start, and won only one race for the season. Alonso needs no reminding of the team's struggles in the early stages of a season, saying: "I am used to hard starts to the season, unfortunately."

Ferrari's anticipated poor start to this season is a result of the team totally overhauling the disappointing 2011 car, while the likes of Red Bull and McLaren had the luxury of making relatively minor adjustments to their strong cars from the tail end of last season.

"Six days of testing are not enough to change black to white," Alonso said. "It’s not a continuation of last year's car, so we need more time than other teams to maximize the car. We will see how competitive we are when we drive in qualifying here in Melbourne, Malaysia and China.

"Sooner or later Ferrari will win races. If we have a slow start it doesn't matter, and that is the good thing about Ferrari."

The man to beat this coming Sunday, and in the season ahead, is Red Bull's Sebastian Vettel, who comfortably won last year's title to add to the 2010 crown. This weekend he will embark on his quest to become only the third man to win a hat trick of championships, after Juan Manuel Fangio and Michael Schumacher.

"I am here to win the championship, that is the target," Vettel said Thursday. "Whether it’s the third or not does not make a difference. It would be a nice thing."

Both Vettel and teammate Mark Webber were eager to stress that the true pecking order of teams will not be established in Australia — a race that has a higher-than-normal attrition rate and often throws up surprise winners and podium places.

"This track is different to a normal race track, and compared to the track we were on (practicing) a couple of weeks ago at Barcelona," Vettel said. "It’s the first couple of races that show you a trend, sooner than that is not possible."

Webber said having only a one-week gap between the opening two races of the season will be critical, as teams will not have time to make major changes or additions if they discover their cars are not on the pace of their rivals.

"Malaysia's just around the corner so we're going to have two quick races, and we're going to get a really quick snapshot of the performance of the cars," Webber said. "It’s going to be very exciting, and difficult to know who's going to do the business until we get going.

"We've been talking now for nine weeks about who's doing what. I'm sick of talking about it, I just want to get out there and get on the track."

McLaren is expected to be the main rival to Red Bull in the early stages of the season, even allowing for the expected improvement by Mercedes and Lotus, which had promising performances in preseason.

McLaren had a major rethink on its car just before 2011's opening race, but is far more settled going into this weekend's opener.

"It’s nice to be back and nice to come here having had a good winter," said Jenson Button, a two-time winner at Albert Park. "The past couple of years have been tricky over winter, but this winter everything has gone according to plan."