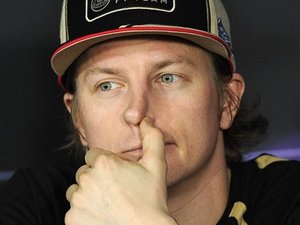 On the eve of his first Formula One practice session in three years, Kimi Raikkonen was typically underwhelmed Thursday, saying he rarely bothered to watch the sport during his absence.

Raikkonen is back from a spell in rally cars and various other forms of racing, joining a Lotus team which is regarded as long shot to win this weekend's season-opening race in Australia.

Most drivers would be excited about returning to the pinnacle of motorsport after a couple of years away. The taciturn Finn is not most drivers.

"I am a little bit older, that's all, but it’s the same really," Raikkonen said. "It really hasn't changed a lot, the car feels very similar. I was expecting to have more difficulties with it, but it’s pretty good."

The 32-year-old former world champion said he did not tune in to F1 much in his time away.

"I didn't watch much the past few years, same people, similar stuff going on," Raikkonen said. "I had other things to do than watch the races. It doesn't mean I don't like the sport — if I didn't like the sport I would not be here."

Lotus has set impressive times in preseason testing, lifting hopes that it can challenge the big teams, at least in the early stages of the season. However Raikkonen is not the kind of driver to make bold predictions.

"I have no idea where we're going to be," Raikkonen said. "Are we going to be in the front? I don't know. I hope so."