Ferguson: Anderson out for 'up to Five Weeks' 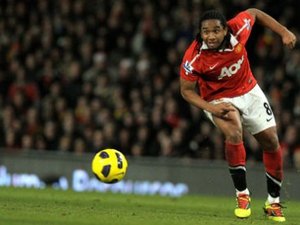 Manchester United's Anderson could be sidelined for up to five weeks with a hamstring injury, the Premier League leaders' manager Sir Alex Ferguson said on Wednesday.

The Brazilian midfielder has seen his season blighted by fitness problems and did not travel to Spain for Thursday's Europa League last 16 second leg tie against Athletic Bilbao.

"'Ando' could be out for four or five weeks due to his hamstring," said Ferguson. "Some hamstrings are relatively straightforward but we have to wait and see how he is in the next week or so to get a better idea of where we stand with him."

United trail 3-2 from the first leg and Ferguson said Rio Ferdinand will partner Jonny Evans in central defense on Thursday as Phil Jones (flu) is missing and Chris Smalling is only fit enough for the bench after reopening a head wound in last week's first leg.

"It's a difficult tie for us. Bilbao have a tremendous advantage after winning at Old Trafford," said Ferguson.

"It's a challenge but not one that is beyond us. Our record away from home helps us -- we've done very well. We're going to need a good performance."