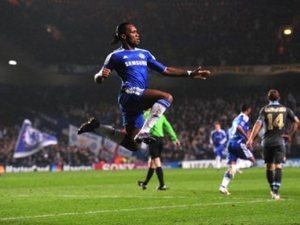 The Premier League giants confounded the bookmakers as well as the weight of history on Wednesday as they overturned a 3-1 first leg deficit with a pulsating 4-1 win over the Italians at Stamford Bridge.

Branislav Ivanovic's dramatic extra-time winner sealed a 5-4 aggregate victory for Chelsea, who are facing an uphill battle to qualify for next season's Champions League after a patchy league campaign.

It was only the fourth time in Champions League history that a club has successfully come back from a two-goal first leg deficit.

Di Matteo -- who has now won three games out of three since taking over following the sacking of Andre Villas-Boas -- believes Chelsea's win over Napoli can lift his side over the vital final few weeks of the season.

"It meant a lot to the club that we're still able to play in the Champions League and also you could see how much it meant to the players tonight," said Di Matteo, who celebrated with the squad at the final whistle.

"I've had some great nights but I think this will go down in the club's history, to be able to come back from a two-goal deficit in the first leg.

"You saw the players tonight, how they performed. They showed passion, they showed that they cared about it, about the team, the club and the supporters. It will give us a big boost for the rest of the season as well."

Chelsea's victory owed everything to the influence of the club's old guard, with Didier Drogba, captain John Terry, and Frank Lampard all scoring the goals in 90 minutes that set up the extra-time finale.

Di Matteo admitted that Chelsea had gone back to basics as they attempted to plot their way past Napoli.

"We just tried tried to be solid, tried not to concede goals. We're always confident with the quality that we have that we can score goals. Every win will increase the confidence of the team," he said.

Di Matteo meanwhile played down suggestions that his unbeaten record as Chelsea manager could enhance his claims to becoming a permanent appointment at Stamford Bridge.

"For me at the moment I'm just trying to win match after match, I'm not thinking about what comes after," he said.

"I don't really think about myself. I'm just focused on trying to win games for Chelsea football club and trying to get the best out of the players.

"We've got three wins in three games and conceded one goal. That's all I'm focusing on.

Blues captain Terry said it was one of the club's greatest nights.

"We showed what Chelsea are all about. We were solid and resilient and fought until the very end. We've proved we're a team. Players came in and we stuck together when it really mattered," he said.

Lampard was delighted with the victory and believes it can be a platform for greater things.

"It's an absolutely huge win for us. It was crucial that whatever the result, we produced a performance to stay in the competition. We can really build on this now and hopefully move onwards and upwards," he said.

Napoli coach Walter Mazzarri meanwhile bemoaned a disastrous night in which very little went right for his side.

"It's a big disappointment for us, especially the way we lost," Mazzarri said. "It's been a great achievement reaching this position in the competition.

"But tonight everything went wrong from the start. We paid tonight for being a bit inexperienced, both in defense and in attack.

"It's a lesson for the future. We've got a young team so we can learn from this but we're disappointed we can't give any more joy to our fans."