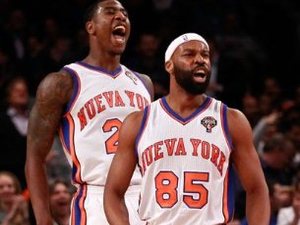 The New York Knicks responded to the turmoil of coach Mike D'Antoni's resignation with a resounding 121-79 victory over Portland that ended a six-game NBA skid.

With newly named interim coach Mike Woodson on the bench for his first game since he was promoted from assistant status for the remainder of the season, the Knicks routed the Trail Blazers.

J.R. Smith led the Knicks with 23 points off the bench -- including seven three-pointers. Steve Novak added 20 and Amare Stoudemire chipped in 17 with eight rebounds.

Anthony had 16 points and seven assists, while Lin -- who became a global sensation with his unlikely rise from bench-warmer to starting point guard -- scored six points with six assists and six turnovers.

The Knicks had gone 6-1 with Anthony sidelined and Lin leading the way. With Wednesday's victory, they are 3-8 with Anthony back.

He admitted he was frustrated by being blamed for the Knicks' recent woes.

"It gets frustrating at times to hear some of the stuff being said about me," Anthony said. "At the end of the day what can I do about it? It's a basketball game.

"I go out there and try to leave it all out there on the court. My ultimate goal is to win basketball games. That's one of the reasons I came here, why I wanted to come here."

Lin, waived by two teams before he was picked up by the Knicks, admitted he found the sudden departure of the coach who gave him his big NBA break "emotional".

"I was surprised," Lin said. "I know some people were talking about it and what-not, but I didn’t know the reality of it.

"I figured after shoot-around he’d definitely be here tonight.

"What he did for my career, I’m not going to forget what he did for me personally," Lin added. "It’s very emotional. I’m sad to see him go and I owe a lot to him."

Despite the upheaval, Woodson said the Knicks' goal remains the same -- a playoff campaign.

"There's still a lot at stake here," said Woodson, who was warmly welcomed by the Madison Square Garden crowd.

"Expectations are high. That's how it should be. I expressed that to the guys. We still have a great opportunity to do something special in New York ... I'm going to hold these guys accountable for that, being the coach."