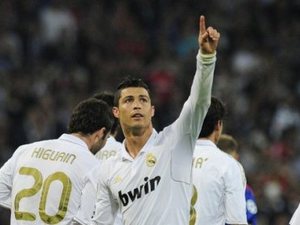 Gonzalo Higuain and Karim Benzema were also on target as Real joined bitter rivals Barcelona in the last eight, the draw for which will be held on Friday.

"It was a good game, we've all played well and we have qualified. We knew what we had to do. We had to win," said Benzema.

Afterwards, Madrid coach Mourinho was happy with his team but underlined how difficult the match had been until Ronaldo got Madrid's second goal of the evening.

"We suffered more than we should have until the second goal and the game was demanding until the end but all Champions League games are," he said.

"We gave a mature and balanced performance and now we'll take on whoever the draw pairs us with on Friday."

The only negative on the night for Madrid was a yellow card for Xabi Alonso that means he will miss the first leg of their quarterfinal tie.

Mourinho decided against bringing in fit-again Frenchman Benzema from the start, preferring instead to field Higuain.

CSKA arrived in Madrid having not lost away in the Champions League all season and they started the game looking well-organized and determined.

That produced an instant reaction from the home side when a Ronaldo shot was well-saved by Sergei Chepchugov in the Russians' goal.

Mesut Ozil looked to French referee Stephane Lannoy when felled in the area on 14 minutes but the contact by Russian center-back Sergei Ignashevich was judged to have been minimal.

Madrid's quick passing increased in intensity and it was no surprise when Sami Khedira and Kaka combined on 26 minutes to set up Higuain for his third goal in this season's Champions League.

Zoran Tosic, for CSKA, and Xabi Alonso, for the Spaniards, wasted good chances from dead-ball situations before Musa produced a stinging shot that Iker Casillas had to turn over the bar.

CSKA survived further damage before the interval before making a tactical change, bringing on Pavel Mamaev for Evgeni Aldonin for the second period.

On 55 minutes, Ronaldo tried his luck with a spinning shot from fully 40 yards that Chepchugov failed to block.

A wicked bounce may have confused the goalkeeper, who failed to get his body behind the ball, and he could only watch as the ball squeezed past him into the net and his side's hopes of a comeback slipped away.

To their credit, the Russians continued to press and Doumbia almost punished Casillas when the Madrid keeper spilled the ball at his feet on 66 minutes.

Mourinho then changed Higuain for Benzema and the Frenchman grabbed Madrid's third within a minute of his arrival, converting an Ozil pass at the second attempt for his fifth goal in this season's Champions League.

Tosic gave the travelling Russian support, numbering around 3,000 fans, something to shout about on 77 minutes with a stunning left-footed strike from the edge of the area that struck the underside of the bar before beating Casillas.

But there was still time for Ronaldo to add his second in injury time as Real marched on.