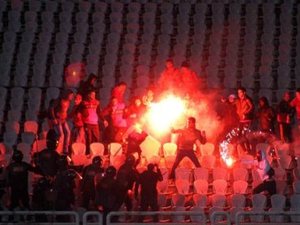 Egypt's top prosecutor on Thursday charged 75 people with murder and negligence in connection with a deadly football riot last month in the Mediterranean city of Port Said.

At least 74 people were killed in the February 1 riot, the world's worst football-related disaster in 15 years.

Those charged include nine police officers and two minors.

Among the police officers are Maj. Gen. Issam Samak, who was Port Said's chief of security at the time of the riot. Samal has already been suspended.

The riot began minutes after the final whistle in a league game between Cairo club al-Ahly and al-Masry of Port Said.

The home side won 3-1 but its fans set upon the rival supporters in a killing frenzy that witnesses said lasted 30 minutes.

Many witnesses claimed that policemen at the venue did nothing to stop the bloodshed.

A statement by the Egyptian general prosecutor's office said the charges were based on video footage of the riot and the confessions of suspects.

It said the killing of the protesters was planned in advance and that the culprits prepared for the massacre with knifes, rocks, and explosives.

Fans from the two teams have a history of animosity.

The Port Said riot led to the cancellation of the football league and sparked days of clashes in Cairo between police and protesters accusing the Interior Ministry, which is in charge of police, of doing nothing to protect al-Ahly fans.

The Egyptian soccer federation has yet to punish al-Masry for the riot.

It is widely expected to relegate the team to a lower league and ban any official games from being played on its grounds.