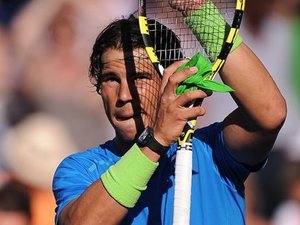 Rafael Nadal raced into the Indian Wells quarterfinals with a dominating win, while Novak Djokovic and Roger Federer needed three sets each to beat unseeded opponents.

Tennis' big three progressed in the California desert with world No. 2 Nadal storming into the quarters by beating 21st seeded Alexandr Dolgopolov 6-3, 6-2 in just 76 minutes.

World number three Federer scrambled for the second-straight day to eliminate an up-and-comer he was facing for the first time, coming from behind to beat Brazil's Thomaz Bellucci 3-6, 6-3, 6-4.

"In the end I was lucky to get through some points," said Djokovic, who has won the last three Grand Slams. "I am happy to go through to the next round."

The 24-year-old Serb came into Wednesday's fourth round match with a 12-1 record on the year, having already captured the fifth Grand Slam title of his career at the Australian Open.

Djokovic looked to be charging his way into the quarters after dominating the first set 6-0 in just 28 minutes.

But he quickly found himself in the middle of a dogfight in the second as unseeded Andujar started to get his serve cracking, winning the set in a tie-breaker to level at one each.

"I think I played one of my better sets in the last couple months in the first set," Djokovic said. "He surprised me with his aggressive approach. He was taking the ball early.

"In the second set I started playing a little bit more defensive and that allowed him to come back into the match.

"In the third set I regrouped. I managed to stay calm mentally and find my rhythm again."

Nadal next plays unseeded David Nalbandian of Argentina, who came from behind to stun sixth-seeded Frenchman Jo-Wilfried Tsonga 3-6, 7-5, 6-3.

Nadal, who finished with four aces, challenged a call to get to match point, after the line judge called a shot on the baseline in. He won the point thanks to a video review that showed the ball was out.

That got Nadal to match point and he clinched the victory when Dolgopolov hit a forehand long.

"Being in the quarters is fantastic," Nadal said.

"He is very difficult to play against. He can produce winners from every part of the court. He's a funny player, good for tennis.

"I started very strong and he had a few mistakes, more than the usual on the backhand, which helped me out a bit."

The 30-year-old Swiss, who already has two titles in 2012, was making a quick turnaround after rallying to win the night match Tuesday against Canadian Milos Raonic in three sets.

"It is always great to come through in a three setter," said Federer, who has been battling a flu bug this week. "I struggled early on to make the transition from night to day matches. I am happy and relieved to be through and still alive in the tournament."