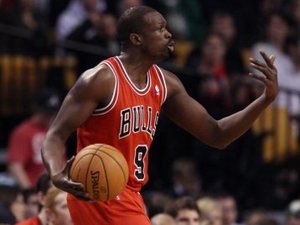 The Chicago Bulls beat a determined Miami Heat 106-102 on Wednesday without the help of the NBA's Most Valuable Player Derrick Rose, stretching their Eastern Conference lead.

"This was a big game. I'm not going to lie," said Chicago's British forward Luol Deng, who returned from a two-games on the sidelines after injuring a wrist.

"Whatever it takes to win, that's what we do," Deng said. "And we've been doing that all year."

With Rose sidelined, John Lucas personified their dogged spirit, scoring a team-high 24 points off the bench that included a career best three three-pointers.

His form helped Chicago survive an onslaught by the Heat with 35 points to James and 36 from Dwayne Wade. The rest of the Heat contributed just 28 points, with Chris Bosh scoring 12 on 3-of-15 shooting.

Miami, who at one point trailed by 17 points, cut the deficit to two with six seconds remaining thanks to two three-pointers by James Jones.

But the Bulls' Kyle Korver and Lucas combined to make six of six from the free-throw line to seal the victory in the final 30 seconds.

Bulls coach Tom Thibodeau, however, was quick to recall that even though his side swept the regular-season series against the Heat last season, it was Miami who triumphed in the Eastern Conference finals series between the two.

"We're chasing them," Thibodeau said. "They're the Eastern Conference champions."