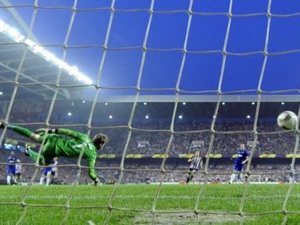 Sir Alex Ferguson admitted he was at a loss to explain Manchester United's dismal performances in Europe this season, after they were knocked out of the Europa League by Athletic Bilbao.

United were outplayed in both legs of their last-16 tie and went down 5-3 on aggregate after a chastening 2-1 defeat at Bilbao's imposing San Mames stadium on Thursday.

Only an 80th-minute consolation strike from Wayne Rooney -- his 27th goal of the season -- prevented the English champions from sinking to the heaviest two-legged European defeat of Ferguson's 25-year tenure.

Ferguson's side had dropped into the Europa League after being knocked out of the Champions League at the group phase, and finished the season having won only three of their 10 games in continental competition.

Having seen his side reach the final of the Champions League last year, Ferguson conceded he was struggling to come to terms with the sharp reversal in their fortunes on the European stage.

"Trying to analyze this season against others is a bit difficult," said the Scot, whose side had reached three of the last four Champions League finals.

"There is a route in terms of some of the goals we have lost in these tournaments. They have been pretty poor. It has been a disappointing year."

Having been knocked out of the FA Cup by Liverpool and eliminated from the League Cup by Crystal Palace, United's only hopes of winning some silverware now rest with their league title defense.

Last weekend's 2-0 defeat of West Bromwich Albion, coupled with an unexpected defeat for Manchester City at Swansea City, allowed the reigning champions to leapfrog their nearest rivals to the top of the standings.

With City not in action again until the visit of Chelsea on Wednesday, United will go four points clear at the league summit if they win at Wolverhampton Wanderers on Sunday, and Ferguson knows there is no time for introspection.

"Feeling sorry for myself is not an issue for me," he said.

"There is a disappointment, but analyzing the performances is more important and we have an important game on Sunday."

As he did after the 3-2 defeat in the first leg, Ferguson conceded that Bilbao had been "the better team" on Thursday evening and he lavished praise on the Basque side for their attacking enterprise and will to win.

"Athletic could do very well," he said. "What we have seen, tonight and last Thursday, is a team whose work rate is higher than anyone I have seen in Europe.

"That takes you a long way, but it is not just about their work rate. They have some fantastic qualities also.

"I would like to wish them well. I hope they do win it because it is a testament to the hard work they all put in, from their coach right through.

"They have created a cause. Such energy and determination to win football matches is an incredible thing to see. They deserve to win it."

With United and City having both been knocked out of the Europa League on Thursday, Chelsea are now the only English team left in Europe, following their superb comeback against Napoli in the Champions League on Wednesday.

Bilbao coach Marcelo Bielsa said he would relish the success against United, but said there was no reason to believe that there are any profound explanations for the English teams' lack of success in Europe this season.

"Victory against a team like Manchester United cannot be ignored," said the Argentine, who led Chile to the last 16 at the 2010 World Cup.

"But I don't have any reason to think it has happened because English football is too insular."

Bielsa will discover the identity of his side's quarterfinal opponents in Friday's draw in Nyon.