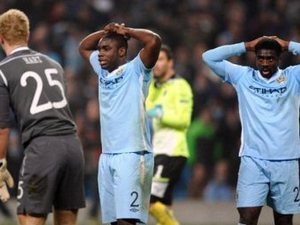 Roberto Mancini saw his expensive Manchester City side fail in Europe once more on Thursday, but still insisted they can still win their first ever Premier League title.

The Italian held himself responsible for the end of their European interest, as a 3-2 second leg victory led to defeat on away goals against Sporting Lisbon, a team currently fourth in the Portuguese league.

City, who trail leaders Manchester United by one point in the Premier League, saw their local rivals also go out of the Europa League just two hours before they did.

Now, both clubs have only the league title upon which they need concentrate.

"We were envious of United," joked Mancini. "They lost so we wanted to lose this game.

Mancini attempted to deflect pressure from his players by blaming himself for the setback, claiming he had failed to prepare his team adequately although he insisted he will not err again, especially with a home game against Chelsea looming on Wednesday.

"It is the second time this year, I hope not," said Mancini who also blamed himself for a recent league defeat at Everton.

"We only have one problem and that is that four important players are injured, that is not good. But I think if we have a spell like we did in the second half, we can win our next game against Chelsea and I am confident for the Premier League.

"We stayed at the top for seven months, now we are in second, one point behind and I am very confident we can win the title.

"The first half we didn't play but I'm the manager, it is not the players' fault, it is my fault. I'm proud of my players because they fought on the pitch but when a manager doesn't prepare for a game well, that's why we lost. When I lose a game I think about why and I think I made mistakes.

"I probably made mistakes preparing for the first game because I thought after beating Porto to play Sporting would be easy but football is never easy and today was probably the same because I gave them a lot of space to counter attack in the first half and we conceded two goals.

"After that, I was proud for the second half because we had a fantastic 45 minutes and I'm very sorry for the players and the supporters who were fantastic. In the end, I am disappointed with myself."

Without the injured Gareth Barry, Joleon Lescott, Pablo Zabaleta and Gareth Barry, City won their second leg tie 3-2, thanks to a remarkable second half comeback, but exited the competition on away goals, having lost the first meeting in Lisbon 1-0.

Matias Fernandez and Ricky van Wolfswinkel seemed to have put the tie well beyond City's reach as Sporting took a 2-0 first-half lead but two goals from Sergio Aguero, either side of a Mario Balotelli penalty, left the Premier League club just one goal short of aggregate victory.

It almost came, in the fifth minute of injury-time from a header by the City goalkeeper Joe Hart, pressed into desperate action up front, but his opposite number Rui Patricio made a fine one-handed save with the last touch of the game.

Ricardo Sa Pinto, the Sporting coach, said: "I'm very proud of being leader of this team, having these type of players working with me."

"City are a massive team so I am really pleased to go through because that gives a good image of Sporting Lisbon, beating one of the best teams in the world."