Hertha out to Halt Bayern Goal-Machine 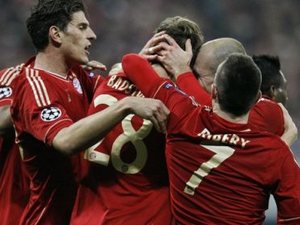 Hertha Berlin coach Otto Rehhagel has told his players they must show courage and passion if they are to throw a spanner in the works of Bayern Munich's goal-machine on Saturday in the German league.

Bayern have scored a remarkable 14 goals in their last two games having hammered Hoffenheim 7-1 in Munich in the Bundesliga, then demolished FC Basel 7-0 in the Champions League.

Victory over the Swiss puts Bayern in the quarter-finals of European football's top club competition, but the Bavarians are now concerned about bridging the five-point gap behind leaders Dortmund in the league.

Bayern's recent form has given their stars a confidence boost with Germany striker Mario Gomez having scored seven goals in his last two games, including a record-breaking four against Basel.

Likewise Dutch winger Arjen Robben has hit four in the two games, and Rehhagel, who took charge in February, has warned his team they must punch above their weight at Berlin's Olympic Stadium.

Bayern are second while Hertha are 16th of 18 teams and just three points from bottom with the Berlin coach admitting his team need a small miracle.

"Everybody has seen what condition Bayern are in," said the 73-year-old Rehhagel who steered Greece to the Euro 2004 title.

"We all need to reach beyond ourselves, then we might have a slim chance. We need courage, passion and enthusiasm, but if we get caught like a rabbit in front of the headlights, we have no chance."

Having scored just five goals in their last 10 games, Rehhagel's team are struggling to score and strikers Adrian Ramos and Pierre-Michel Lasogga must find some form if Berlin are to escape the relegation places.

Despite all the euphoria surrounding Bayern, Jupp Heynckes' team have lost both of their last two away games, failing to score in either.

Just a fortnight ago they lost 2-0 at Leverkusen, when they did everything but score, and their shock 1-0 first-leg defeat at Basel three weeks ago put them on the verge of a Champions League exit before they roared back in the return.

Heynckes knows his side has to improve their away form if they are to prevent Dortmund winning a consecutive title having suffered four of their six league defeats on the road this season.

"Barcelona are the best team in the world, but they trail Real Madrid in the Spanish league by 10 points," he pointed out.

"Why? Because they failed in the away games. It is the same for every team."

Dortmund host six-placed Werder Bremen on Saturday eager to get back to winning ways after they were held to a goalless draw at Augsburg, who are just above the relegation zone.

Bremen will be without top scorer Claudio Pizarro, who has been banned for two games for slapping Hanover defender Emanuel Pogatetz across the face in Bremen's 3-0 win last weekend.

"It won't make is easier that Pizarro is not playing, because Bremen will be more difficult to calculate," said Dortmund coach Jurgen Klopp. "The whole team will step up a gear."

Fifth-placed Bayer Leverkusen host Borussia Moenchengladbach, who are third in the table, and will be without Germany midfielder Lars Bender who tore his right thigh during their 3-2 defeat at Wolfsburg last Saturday.

Gladbach, who are eight points behind Dortmund and three behind Bayern, need a win to stay in touch with the leaders after being held to a goalless draw at second-from-bottom Freiburg last weekend.