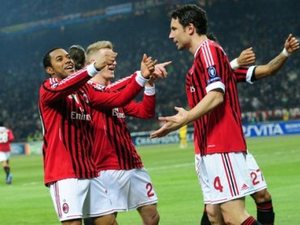 Champions AC Milan will look to continue their march to a second straight scudetto crown when they travel to inconsistent Parma on Saturday.

Milan are four points clear at the top and with what is widely regarded as the best squad and best individuals in Serie A, they are expected to face few difficulties in retaining their title.

And part of that reason is the gradual disintegration of Juventus's own challenge.

Juve largely made the early running in the title chase and until this month they were at the head of the table.

And it is not even as if Milan's form has been that spectacular with 14 points from their last seven matches not normally a sufficient return to win a championship.

But Juventus are in a downward spiral and hardly a week seems to go by without Juventus complaining about refereeing decisions, the latest being from their 0-0 draw at Genoa last weekend.

The Old Lady of Turin made a silent protest, refusing to talk to the press after the game, saying the images would speak for themselves.

Their bone of contention was a disallowed goal for Simone Pepe which was not even contested by players on the pitch as, to the naked eye, the forward appeared well offside.

It was only later television replays that suggested he may well have timed his run to perfection.

Far clearer was the penalty Genoa should have been awarded in injury time after Andrea Pirlo tripped Rodrigo Palacio in the box.

Even so, Juve president Andrea Agnelli was not letting up during the week with his cries of victimisation.

"We've realized that we have to be in a condition to fight against everything and everyone, knowing that our strengths are enough to obtain results," he said.

"We're not tiresome (with all their moaning), we entertain and provoke pride."

Juve travel to Fiorentina on Saturday and will have to be wary of former forward Amauri, who will have a point to prove after being frozen out at the Turin giants last season and the first half of this campaign before he made a January move to Florence.

Behind the top two, defeats for Lazio and Udinese last week realistically ended their slim title hopes and mean they are now in Napoli's clutches in the fight for third place and the final Champions League berth.

Napoli are the form team in the league with five straight wins and they travel to Udinese on Sunday.

The northerners seem to have lost their way recently, winning only one of their last six and crashing out of the Europa League.

However, it remains to be seen how Napoli react to their heart-breaking extra-time Champions League exit to Chelsea.

A couple more teams have a slight chance of getting involved in that race but both Inter Milan and Roma would need to string some results together to do so.

The nerazzurri host Atalanta, Lazio are away to Catania and Roma entertain Genoa on Monday night.