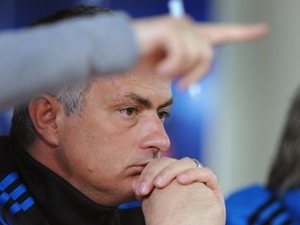 Real Madrid coach Jose Mourinho may be inching towards becoming the first coach to win the Champions League with three different clubs, but it is the La Liga crown that remains his chief target.

Real tackle Malaga this weekend in search of their 22nd win from 23 games and boasting a 10-point lead over bitter rivals Barcelona in the title race.

Mourinho has added steel to the Madrid side along with an attacking flair that has seen them score 88 goals so far in the league.

In the Champions League, dreams have been stirred of a 10th European crown after having endured seeing Barca win two of the last three competitions.

"The league is a very important competition. It is possible that a side that isn't the best wins the Champions League but that is not the case with the league," said Mourinho.

"It is possible to win the double or end up with nothing as football is like that.

"We will now give everything against Malaga as that is still the competition that is most important for our confidence.

"The Champions League gives you the glory but the championship shows the best side over eleven months and we are not going to give any points away."

Barca, with Lionel Messi fresh from notching his 50th goal of the season last weekend, travel to face Sevilla following the news that Eric Abidal needs to have a liver transplant.

The French defender had a tumor removed last year and the transplant is part of ongoing treatment.

"It was a shock for us when we were told but we are all behind him and he is in good spirits," said club captain Carles Puyol.

Meanwhile, the club are still uncertain over the future of coach Pep Guardiola, who is yet to sign a new contract, and the players have spoken out over how important he is this week.

"What team would be prepared for their most successful coach leaving? Pep has the respect of everyone, not just for the titles but for the way we won them," said Javier Mascherano.

Third-placed Valencia's stuttering form saw them surrender a two-goal lead to draw 2-2 against Real Mallorca last weekend and now they have a tricky away match against an Athletic Bilbao side buoyed by their midweek Europa League win over Manchester United.

Levante, who play Villarreal, have dropped out of the top four after an excellent first half of the season and are level on 38 points with Osasuna, who themselves are putting together a surprising bid for a place in Europe and are up against bottom side Zaragoza.

Atletico Madrid and Espanyol are also strong candidates for European places and they take on Mallorca and Racing Santander respectively.

New Sporting Gijon coach Javier Clemente secured his first victory against Sevilla as they fight for survival and they now face a relegation battle with Granada.