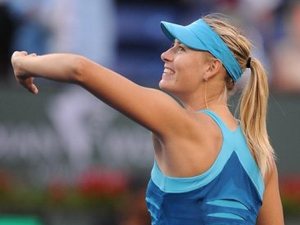 Sharapova needed three hours and five minutes to dispatch Kirilenko in their first meeting since the opening round of the 2010 Australian Open, which Kirilenko won in three sets.

"I tried to keep my head up today even though I wasn't playing my best," said Sharapova, who won the Indian Wells title in 2006. "Towards the end I started to play better and move better."

Sharapova will face another former Indian Wells winner, Ana Ivanovic, in the semis after the Serbian eased past a stricken Marion Bartoli 6-3, 6-4 in a rematch of their quarterfinal contest from last year.

Second seed Sharapova had cruised through her first three matches at the joint WTA and ATP event without dropping a set but she quickly ran into trouble Thursday against Kirilenko -- who had won eight of her previous nine three-set matches this year.

Kirilenko is getting a reputation as the WTA Tour's iron woman. This was the third straight three-setter for Kirilenko and the second time in the tournament she has gone past three hours in a match.

She became the first player in the tournament to take a set off Sharapova, breaking the former world No. 1 twice in winning the opening frame in 43 minutes.

"She started very well, but it was also a poor start from my end," Sharapova said. "I think she controlled most of the points and I was on the defense a lot. That created so many opportunities for her and she gained so much confidence after that."

Sharapova held serve in a marathon fifth game of the second set to go up 3-2. She survived several break points including one by hammering a 166 kph (103 mph) ace down the middle. It was one of six aces for Sharapova in the match.

Sharapova dropped the first two games of the second set, but then won four in a row to climb back into the match.

Kirilenko had to overcome a hindrance call to the win the 10th game of the second set and level the set at 5-5.

Kirilenko led 30-15 on her serve when chair umpire Marija Cicak of Croatia deducted a point from her for tapping her racquet on the ground three times in quick succession while Sharapova was hitting a shot. Kirilenko went on to win the next point.

Asked if she heard the tapping, Sharapova said yes.

"Unless you're deaf, of course you notice it," Sharapova said. "The whole stadium was quiet. It's not something I've ever come across. Maybe in the 12 and unders, but not very recently.

"It's one thing if you do it once, but I think she did it three or four times. It's not like a hockey puck or something. She forgot, I think, the sport."

Sharapova broke Kirilenko's serve to win the second set after Kirilenko had saved two set points, and in the third Kirilenko double faulted on Sharapova's first match point, her sixth double fault of the match.

Ivanovic's victory over Bartoli was something of a grudge match.

France's Bartoli reached the semi-finals in Indian Wells last year with a close 6-4, 7-6 (7/4) win over Ivanovic. Bartoli went on to the final where she lost to Caroline Wozniacki.

"I am definitely happy to be through and get my revenge," Ivanovic said. "It was a tough match. I served well."

But Bartoli wasn't 100 percent. Trailing 1-2 in the second set, she asked for the doctor to come onto the court.

She was in discomfort for the remainder of the match, bending over and grabbing her stomach between serves, apparently battling the stomach virus that has prompted several players to pull out of the tournament or retire from matches.

"When I went on the court I was very dizzy and it was very hard for me to catch my breath." Bartoli said.