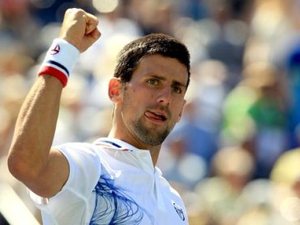 Top seed and defending champ Novak Djokovic stepped up his bid for his third Indian Wells title by easing past 12th seed Nicolas Almagro 6-3, 6-4 on Thursday.

World number one Djokovic has now beaten Almagro in all three career meetings and he has reached the Indian Wells semis for the third year in a row.

Djokovic, who has won the last three Grand Slams, is coming off one of the best years in the history of tennis, as he started off 2011 with 41 consecutive match wins. He is now 14-1 in 2012.

"I have had a lot of success here in the past and won it twice," said Djokovic. "Last year was incredible. I may not be able to repeat what I did but I will try my best."

The Serbian next faces American 11th seed John Isner who defeated Gilles Simon of France 6-3, 1-6, 7-5 in the other quarterfinal.

"What made me happy was my serve," he said. "I served well. I didn't lose many points on my service games in both sets, and that's something that I have been working on. I have been trying to get more free points on the first serves."

"It was never going to be easy," Djokovic said. "Nicolas is a top 15 player. Even though he is a clay court specialist he can play well on hardcourts."

Almagro is one of the busiest players on the ATP Tour this year as this was his seventh tournament. He captured his 11th career singles title in Sao Paulo last month.

"Today I had a very powerful ball striker on the opposite side of the net," Djokovic said. "He's very solid with the groundstrokes and has a powerful serve.

"But I knew that he's inconsistent with that, so I just needed to hang in there."

Isner, 26, has now won both career meetings against Simon, including a three hour, 39-minute battle in the fourth round of the 2011 U.S. Open.

"I am thankful to get through," he said. "Tonight I didn't get too frustrated. I made a lot of mistakes but he does that to a lot of players."

Djokovic says it doesn't get easier from here on.

"As the tournament goes on you're going to play more difficult opponents," he said. "It's gonna get tough out there.

"But I have played so many matches on the tour and the big stage, major events, and I learned over the years what I need to do in order to play my best when it matters the most."

Djokovic's win keeps alive the prospect that the game's big three -- Djokovic, Roger Federer and Rafael Nadal -- could make it to the semi-finals.

All three reached the semis five times in 2011 and also at this year's Australian Open.