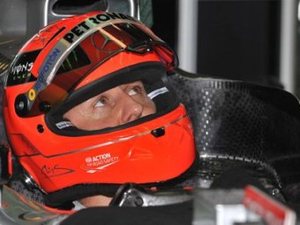 Michael Schumacher rolled back the years Friday as he topped practice for the first time since returning from retirement in 2010, ahead of this weekend's season-opening Australian Grand Prix.

The seven-time champion, 43, clocked a best lap of one minute and 29.183 seconds in his Mercedes in the final minute of a dramatic day's action at rain-hit Albert Park.

The lap lifted him ahead of fellow German Nico Hulkenberg by one-tenth of a second, the Mercedes-powered Force India driver having been on top for most of a closely-fought final 10 minutes.

Mercedes boss Ross Brawn said: "We're in much better shape here now than 12 months ago and we've got a stronger bed of foundation.

"All our resources are now being put into improving the performance of the car, whereas 12 months ago there was all sorts of things wrong with the car, so we were distracted. I think this performance proves what I mean!

"And it is wonderful for Michael of course!"

Schumacher had retired after the 2006 season after clocking up 91 victories in a record-breaking career.

Mexican Sergio Perez of Sauber was third ahead of two-time champion Fernando Alonso of Ferrari and Japan's Kamui Kobayashi in the second Sauber.

Most of the leading drivers opted to jump on to soft tyres in the final minutes as the track dried out, conditions that led to the unexpected mix-up in the final result.

This saw Briton Paul Di Resta take sixth in the second Force India and Brazilian Felipe Massa seventh for Ferrari, ahead of Finland's Heikki Kovalainen of Caterham and ninth-placed Nico Rosberg in the second Mercedes.

All this left defending double world champion Sebastian Vettel of Red Bull down in 10th ahead of his Australian team-mate Mark Webber.

The 2009 champion Jenson Button, who was fastest in the earlier opening session, wound up in 15th for McLaren ahead of British team-mate Lewis Hamilton, the 2008 champion.

Returning 2007 champion Kimi Raikkonen was 18th for Lotus at the end of his first day back after two years out of Formula One in rallying.

After a rain-hit opening session earlier in the afternoon, the second 90 minutes of track action was preceded by another heavy storm that left the circuit awash with water.

This led to a slow start and it was half an hour before any decent times were recorded in front of an impressive attendance of 70,500 -- 2,000 up on 2011 -- as various drivers attempted to test the conditions.

This produced a list of different men at the top of the standings and various spinning cars, including local hero Webber in his Red Bull.

The Hispania team had some good news when their veteran Spanish driver Pedro de la Rosa managed to glide out of the pits for the first time in his car, built up and finished by the team after an all-night shift by the mechanics.

In the wet conditions, Australian Daniel Ricciardo of Toro Rosso was soon fastest, followed by French rookie Jean-Eric Vergne in his Toro Rosso. Then Ricciardo spun and Venezuelan Pastor Maldonado of Williams set the pace.

It was all action as the track dried, with a succession of fastest men including Brazilian Felipe Massa for Ferrari, Button, Maldonado again and Schumacher.

They were followed by Perez, Schumacher again and, finally, the cluster of men who fought it out in the final 10 minutes as Raikkonen and Hamilton joined the fray, having spent most of the session waiting in their garages.