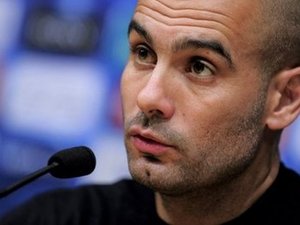 Barcelona coach Josep Guardiola will remain with the Spanish champions until June 2012 after signing a one-year extension to his current contract on Wednesday.

The 40-year-old's current deal was due to expire at the end of the season but earlier this month the club announced he had agreed to stay for another year.

Guardiola, who spent most of his playing career at Barcelona, coached Barcelona's B team before taking control of the first-team squad in June 2008 from Dutchman Frank Rijkaard.

"This success has been achieved playing football with his personal stamp, which has won praise from all sides and has accumulated incredible individual and team records, the latest one being the record of wins (79) in his first 100 games in charge in the Spanish league," the club said in a statement.

Barcelona are currently five points ahead of arch rivals Real Madrid at the top of the Spanish league table.