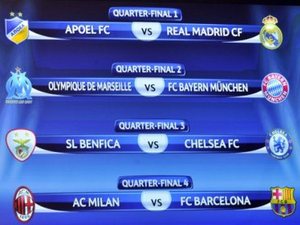 Spanish giants Barcelona and Real Madrid were kept apart in the draw for the Champions League quarter and semifinals here on Friday, setting up the possibility of a final showdown between the two in Munich.

Sole English survivors Chelsea will take on Benfica of Portugal, while the remaining tie sees Marseille up against Germany's Bayern Munich.

Both Barcelona and arch-rivals Real have advanced to the last eight of the competition without really being tested and, given the size of the gap between them and the rest of the continent, the feeling was that only the draw could prevent them from meeting in the final itself on May 19.

That did not happen but Real coach Jose Mourinho will be happier than his Barcelona counterpart Pep Guardiola at having drawn APOEL -- the first club from the Mediterranean island ever to reach the last eight of the Champions League.

Six of the quarterfinalists are previous winners of Europe's premier club trophy, with APOEL and Chelsea being the two exceptions.

After the routs of the two Manchester clubs and Arsenal, Chelsea saved face for the English by squeezing into the last eight in extra-time at the expense of Italy's Napoli having lost the first leg 3-1.

Interim coach Roberto Di Matteo will not be disappointed by the prospect of taking on outsiders Benfica, who are back in the Champions League quarterfinals for the first time since 2006.

The club's chief executive Ron Gourlay said: "I think it's a good one for us.

"It doesn't matter who you get at this stage, it's going to be a difficult game but I think it was important for us to get the away game first and then hopefully build the foundation from there. So, I think we're pleased.

"With Ramires and David Luiz they'll know quite a bit about the club and also we know quite a lot about Benfica from the fact they topped Manchester United's group. They're a very, very strong side and we're looking forward to the upcoming games."

Marseille, who are back in the last eight for the first time since they won the trophy in Munich in 1993, will start as underdogs against in-form Bayern who defeated FC Basel 7-1 over two legs to go through.

The French club's president Vincent Labrune said the match against Bayern would be "very, very difficult" and that he had feared drawing the German side in the last eight.

"Our German friends are happier than us," he told Eurosport. "But we have to try our luck to the maximum and continue to dream."