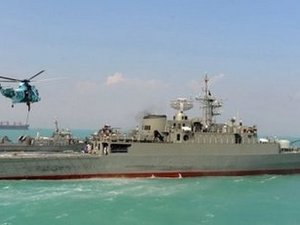 The NATO military alliance said Wednesday it was monitoring two Iranian warships that have entered the Mediterranean Sea, a presence that has unnerved Israel.

"We follow events in the region and we follow these two Iranian warships with as much interest as we do any other warships in the region," said NATO spokeswoman Oana Lungescu.

"We are monitoring events," she told reporters, refusing to elaborate.

The U.S. State Department said earlier that Washington would be "watching carefully to see where these ships go and the implications of that."

The Iranian ships sailed through the Suez Canal into the Mediterranean on Tuesday at a time of upheaval in Europe's Arab neighborhood.

It was the first time Iranian vessels entered the canal since the 1979 Islamic Revolution.

En route for Syria, it took them past Israeli territorial waters and Israel put its navy on high alert, saying it would respond immediately to any "provocation."

Earlier Wednesday, Israeli President Shimon Peres said that the passage of the ships was a "political provocation."

The Kharg, a supply ship, and the Alvand patrol frigate sailed through the Suez Canal into the Mediterranean on Tuesday on their way to Syria, an Iranian ally and Israeli enemy, in what Tehran has described as a routine visit.

But analysts have said the move was an attempt by Iran to project its clout in the region at a time when anti-government protests sweeping the Arab world from Casablanca to Cairo are shifting the regional balance of power.

"I don't look upon it as a major event, I think it is a political provocation. You have to keep cool, you should not become nervous because two ships are crossing the Suez," Peres told a conference in Madrid.

"They are following the instructions of the Egyptians. Let them cross."

Egypt's ruling military council, which has been running the country since President Hosni Mubarak quit on February 11 following massive street protests against his government, approved the ship's passage through the waterway, a vital global trading route.

Israel considers Iran, which opposes the Jewish state and supports Hizbullah and Hamas, a serious threat.

The Suez Canal Authority said last week that ships of any nationality can pass through "as long as the country is not in a state of war with Egypt."