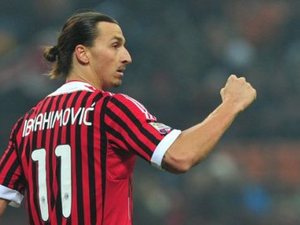 AC Milan cruised to a comfortable 2-0 win at Parma on Saturday to maintain their four-point lead over Juventus, who coasted to a 5-0 win at Fiorentina.

A penalty from Zlatan Ibrahimovic and Urby Emanuelson's stunning solo effort secured a win for the rossoneri that never looked in doubt and heaped the pressure on Juve in the late game.

But helped by Alessio Cerci's first half dismissal, they cantered to victory with goals from Mirko Vucinic, Arturo Vidal, Claudio Marchisio, Andrea Pirlo, and Simone Padoin.

It was a crucial success for Juve and only their second win in eight games but with 10 games left, Milan appear to have hit their stride at just the right time.

Their result was earned despite a host of important first team players such as Kevin-Prince Boateng, Mark van Bommel, Robinho, Pato, Philippe Mexes, and Alessandro Nesta being ruled out.

It meant Emanuelson playing in the 'trequartista hole' behind the front two.

"(Coach) Allegri plays me as a trequartista and asked me to move up front a lot with Ibra and (Stephan) El Shaarawy and I'm happy with this role," he said.

"Today it was important to stay on Milan's heels and win," said former Milan star Pirlo.

"We've scored many goals but it would have been important to score a few less here and some in other situations.

"The extra man helped but we were already in front before Cerci's sending off and hence we'd started well from the off."

Juve gave an early sign of their intent when Vucinic took a quick shot that came back off the post and with the goal at his mercy Alessandro Matri could not sort out his feet and blazed over.

But on the quarter hour mark Vucinic curled home from outside the box.

Cerci then earned a straight red card for a kick at Paolo De Ceglie.

Vucinic then teed up Vidal to shoot home at the second attempt after goalkeeper Artur Boruc saved his first shot.

After the break Fiorentina went into total meltdown.

Marchisio arrived at the back post to head home Vucinic's cross and then the Montenegro forward also set up Pirlo to clip home over Boruc.

Pirlo then had a shot deflected leaving substitute Padoin with an easy tap-in from a few yards out.