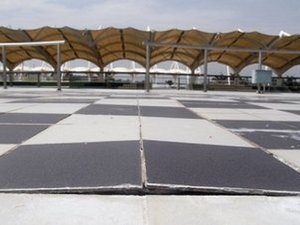 Malaysia's Sepang Formula One event is losing traction, according to the circuit's boss who admitted the shabby stadium and tropical temperatures have caused ticket sales to plunge.

The Malaysian event has also been outshone by neighboring Singapore, which offers not just adrenaline-packed night racing on a street circuit, but teams it with live entertainment by big-name performers like Beyonce.

Razlan Razali, chief executive of the Sepang International Circuit, said that Malaysians increasingly preferred to watch the race on television rather than brave the afternoon heat.

"It has lost its luster," Razlan said in an interview with Agence France Presse.

"Having Singapore next to us for F1 does not help and our biggest competitor is the television as many people prefer to watch the race from the comfort of their homes."

Despite ticket prices going for as low as $19, the cheapest on the F1 circuit, the 13-year-old Sepang event which has a daily capacity of 130,000 has not been pulling in the crowds.

The circuit boss admitted that Sepang is a "tired-looking" venue in urgent need of rejuvenation.

But he said he has received no reply after petitioning the government to fund a major overhaul at a cost of 180 million ringgit (59 million dollars).

Sepang's soaring roof, inspired by the hibiscus which is Malaysia's national flower, need to be replaced as the grandstand canopy has exceeded its lifespan and cannot cope with Malaysia's tropical downpours.

"When it rains, it leaks. People are not happy. The circuit was built in a record time but unfortunately there were shortcuts and poor maintenance," he said.

The sport's ringmaster Bernie Ecclestone proclaimed Singapore as the "jewel in F1's crown" when the city-state hosted its first night race in 2008.

But in crushing comments for Malaysia, he likened Sepang to "an old house that needs a bit of redecorating."

"It's starting to get a little shabby and looks a bit tired. There is rubbish all over the place and it’s not really a good sign for Malaysia," Ecclestone said at the time.

Razlan, who took over shortly after Ecclestone aired his criticism, said that to counter the decline, Sepang should stage a night race before its rights to host F1 expire in 2015.

"We should do one night race before we extend the 2015 contract. Maybe this will attract a bigger crowd as the weather at night will be cool," the 38-year-old said.

Other Asia-Pacific countries that host Formula One races are Australia, China and South Korea. India holds its first race this year.

But Razlan said that despite its shortcomings, the Malaysian event has a strong impact on the national tourism industry as it is beamed live across the globe, providing priceless publicity.

"(Financially) it is a loss-making event but the economic impact to the country is great," he said.

Malaysia will host the second leg of this year's Formula One calendar on April 10 after the season-opening Bahrain Grand Prix scheduled for March 13 was cancelled due to the deadly political unrest in the Gulf state.

Razlan said that so far demand for the 13th Malaysian Grand Prix has been disappointing, and well short of the targeted average of 33,000 a day over the three-day event.

"In November we began our promotion. We have sold 6,000 tickets to foreigners. However the domestic market is yet to pick up," he said.