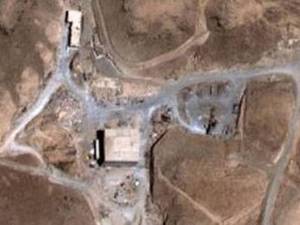 Satellite photos published by a Washington think tank on Wednesday appear to show Syrian efforts to conceal a second suspected nuclear site allegedly linked to a reactor bombed by Israel in 2007.

The photos acquired by the Institute for Science and International Security (ISIS) indicate Syria tried to cover up its nuclear activities after the air raid, and could lead the U.N. nuclear watchdog to step up demands for inspections.

The photos show heightened activity and the pouring of a concrete foundation around the site near Marj as-Sultan, outside Damascus, shortly after a May 2008 request for inspections by the International Atomic Energy Agency (IAEA).

"The facility's operational status is unknown. However, there is suspicion that Syria may have emptied the buildings prior to mid-2008 and taken steps to disguise previous activities at the site," the ISIS report said.

"Laying down a new foundation could be an attempt to defeat the environmental sampling that IAEA inspectors would likely carry out to see if uranium was present in the event of a visit to these suspect sites."

Citing the IAEA and the German newspaper Sueddeutsche Zeitung, ISIS said the Marj as-Sultan facility was one of three sites that were "functionally related" to the bombed reactor at Dair Alzour, in the east of the country.

Syria has snubbed a request by the U.N. nuclear watchdog for prompt access to a number of sites, and could come under heightened scrutiny at the Vienna-based IAEA's meeting next month, diplomats told Agence France Presse last week.

Damascus granted U.N. inspectors one-off access to Dair Alzour in June 2008 but no follow-up visits there or access to the other allegedly related sites.

On the basis of that one visit, the IAEA has already said the building bore some of the characteristics of a nuclear facility.

U.N. inspectors also detected "significant" traces of man-made uranium there, as yet unexplained by Damascus.

Syria has denied it is hindering the IAEA's work, and President Bashar al-Assad denied his country had pursued a nuclear program in an interview with the Wall Street Journal last month.

"We know him as someone connected to the axis of evil, on the one hand to Iran and on the other to terror groups like Hamas and Hizbullah," Yaalon added.

"We are warily following events there, and I hope Assad will not challenge us with provocations of this kind."

For his part, Israeli Prime Minister Benjamin Netanyahu refused to address the report directly, according to Ynet, but said "I want to make it clear that if Syria strives for peace, it will find a loyal partner in Israel. The problem still revolves around how to conduct the negotiations, because Syria has said it wants to receive the final results before talks even begin."