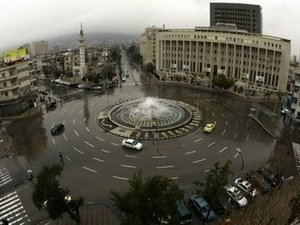 The photos posted on the ISIS website on Thursday appear to show Syrian efforts to conceal a site allegedly linked to a facility which Israel bombed in 2007 and where U.N. inspectors have been investigating suspicions of nuclear work.

The pictures show heightened activity and the pouring of a concrete foundation around the second site near Marj as-Sultan, outside Damascus, shortly after the May 2008 request for inspections by the U.N. watchdog, the International Atomic Energy Agency (IAEA).

Gilad said the new images show "Syria has not succeeded in relaunching its nuclear program," but suggested they also showed new activity that could be an attempt to build new weapons development sites.

Syria has denied that the site bombed by Israel in 2007 was a nuclear facility, and President Bashar al-Assad told the Wall Street Journal last month that his country had not pursued a nuclear program.