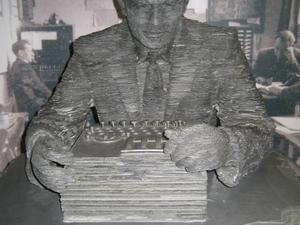 Papers relating to codebreaker and computer pioneer Alan Turing will go to a British museum after the National Heritage Memorial Fund stepped in to help buy them for the nation.

The government-backed fund said Friday it had donated more than 200,000 pounds ($320,000) to a campaign to stop the notes and scientific papers from going to a private buyer.

The fund's chair, Jenny Abramsky, said the collection would be a permanent memorial to "a true war hero."

The documents were put up for auction by Christie's in November but did not sell.

An online campaign to keep them in Britain raised 28,500 pounds from members of the public, and computer firm Google contributed $100,000.

The papers will go to the Bletchley Park Museum northwest of London, which commemorates the famous World War II codebreaking center.

One of the founders of modern computing, Turing worked at Bletchley Park, and helped crack Nazi Germany's secret codes by creating the "Turing bombe," a forerunner of modern computers, to help reveal the settings for the Nazi's Enigma machine.

Turing also did pioneering work on artificial intelligence, developing the "Turing Test" to measure whether a machine can think. One of the most prestigious honors in computing, the $250,000 Turing Prize, is named after him.

But he was not always considered a national treasure. Turing was prosecuted for homosexuality, stripped of his security clearance and forcibly treated with female hormones. He then killed himself in 1954 at age 41.

Homosexuality was illegal in Britain until 1967.

In 2009, then-Prime Minister Gordon Brown made a public apology on behalf of the government for Turing's "inhumane" treatment, saying: "We're sorry, you deserved so much better."

Most of Bletchley Park's secret files were destroyed after the war, and Turing left few records of his work.

The papers in this collection belonged to his friend and fellow codebreaker Max Newman and include 16 of the 18 scientific papers Turing published in his lifetime — notably "On Computable Numbers," a landmark in the history of computing.