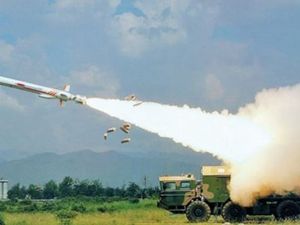 Russia announced Saturday that it intended to fulfill its contract to supply Syria with supersonic anti-ship cruise missiles despite furious condemnation of the deal by Israel.

"The contract is in the implementation stage," news agencies quoted Defense Minister Anatoly Serdyukov as saying.

Russia initially agreed to send a large shipment of high-tech Yakhont cruise missile to Syria in 2007 under the terms of a controversial deal that was only disclosed by Serdyukov in September 2010.

The revelation infuriated both Israel and the United States and there had been speculation that Russia would decide to tear up the contract amid the current turmoil plaguing north Africa and the Middle East.

The sale is believed to be worth at least 300 million dollars and is meant to see Syria receive around 72 cruise missiles in all.

Russia has not confirmed making any Yakhont deliveries to date and it remains unclear when the military intends to fulfill the agreement.

Serdyukov's comments come amid Russian efforts to preserve its military supply line open to the Middle East despite the revolutions and social unrest currently shaking the region.

A source in the Russian arms exports industry said this week that the north Africa and Middle East turmoil may see the country lose about $10 billion dollars in contracts.

Serdyukov confirmed on Saturday that the unrest may force Russia to give up some of its Soviet-era clients in the region.

"There is a chance we might lose something," the defense minister said on a visit on visit to Russia's Pacific port city of Vladivostok.

"But I hope that the main weapons and military equipment agreements will be fulfilled," Serdyukov said.

Russia's sales to Syria have come under particularly close scrutiny because the country remains technically at war with Israel.

The head of the country's arms export agency was forced in October to deny that Russia had signed an agreement to supply Syria with new MiG-31 fighter jets.