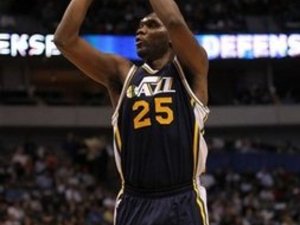 Al Jefferson scored 16 of his 30 points in the fourth quarter Friday as Utah defeated Indiana 95-84 for their first NBA victory since longtime coach Jerry Sloan stepped down.

Paul Millsap added 23 points and a season-high 18 rebounds for Utah, who had dropped four straight since interim coach Tyrone Corbin took over after Sloan's abrupt departure.

Devin Harris, playing his first game for the Jazz since the trade that brought him to Utah and sent Deron Williams to New Jersey, added 14 points as a reserve.

"It seemed like a weight was lifted off our shoulders, getting the first win, and especially getting one for Ty," Millsap said. "Tonight was for Ty to get his first win.

"Hopefully, that will start a streak for us."

Utah trailed only once after the first quarter and despite their inability to connect from the three-point range were able to control the pace of play.

"It feels great," Corbin said. "The guys did a great job. They made a great effort. They stayed in the game the entire 48 minutes tonight. You can't ask for anything more from them."