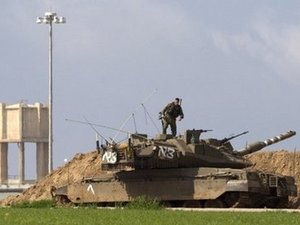 A rocket fired from the Gaza Strip hit Israeli territory on Sunday morning, raising Israel's alert level but causing no damage or casualties, according to Israel's military and police.

The latest rocket, which the military's spokeswoman said struck a field in the Eshkol region in southern Israel, comes after a string of Israeli air raids targeting militant training camps across the Gaza Strip on Saturday night.

The military said the attacks "targeted a number of terror hubs... in response to recent rocket fire into Israel."

The air raids came after tensions rose along the Israel-Gaza border this week following clashes in which an Islamic Jihad gunman was killed and a rocket attack on the Israeli city of Beersheba hit a house but caused no casualties.

It was the first rocket to reach the city since the devastating offensive Israel waged against Gaza December 2008 to January 2009, prompting Prime Minister Benjamin Netanyahu to warn the territory's militants not to "test" the Jewish state.

Police spokesman Micky Rosenfeld said Sunday that the country's alert level had been raised in response to the renewed rocket fire and regional instability.

"The police examined the security situation and decided to raise the alert level on Israeli territory for a week," Rosenfeld said.

"The security examination was undertaken after the new Palestinian rocket fire on Sunday and because of the continued unrest in the Arab and Muslim world," he said.