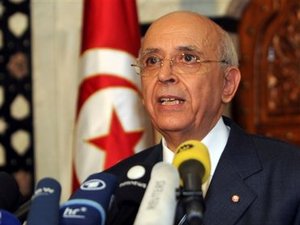 "I have decided to quit as prime minister," Ghannouchi told a news conference, saying that he thought carefully before taking the decision which was supported by his family.

"I am not running away from responsibility. This is to open the way for a new prime minister," he said.

"I am not ready to be the person who takes decisions that would end up causing casualties," Ghannouchi said.

"This resignation will serve Tunisia, and the revolution and the future of Tunisia," he added.

Rampaging youths hurled rocks at buildings to break the windows and threw up barricades to impede the police who were not able to disperse them.

Three people were killed when an anti-government protest in Tunis on Saturday turned violent as riot police and masked police in civilian clothes fired warning shots and tear gas at hundreds of protesters.

Demonstrators were demanding the removal from the interim government of members of the regime of Zine El Abidine Ben Ali, whose toppling on January 14 after weeks of protests sparked similar uprising across the Arab world.

The interior ministry said the three who died on Saturday were among a dozen wounded, with several members of the security forces also hurt in the clashes.

More than 100 people were arrested for involvement in the unrest on Saturday and 88 people after a demonstration Friday, it said, blaming the violence on "agitators" it said had infiltrated peaceful demonstrators.

The ministry also said that these agitators had used young highschool students as "human shields to commit acts of violence, arson to spread terror among the population and target the security forces".

In the biggest of several rallies against the transitional authority, about 100,000 protesters marched down the capital's main avenue on Friday shouting slogans, including against Ghannouchi who was in Ben Ali's government.

In response to the growing protests, the interim government announced Friday that it would hold elections by mid-July.

Ben Ali's fall after 23 years in power sparked similar uprisings against long-time rulers in the region, including one that led to the downfall of Egyptian president Hosni Mubarak on February 11 and another under way in Libya.