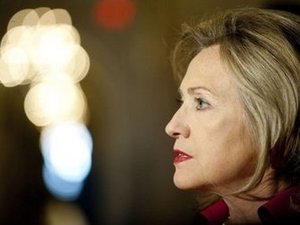 The United States said Sunday it was prepared to offer "any kind of assistance" to Libyans seeking to overthrow the regime of strongman Moammer Gadhafi as they set up a transitional body.

As forces opposed to the longest-serving Arab leader took control of several western Libyan towns, U.S. Secretary of State Hillary Clinton echoed the calls of world leaders, including President Barack Obama, for him to quit.

"We are just at the beginning of what will follow Gadhafi," she said.

"First we have to see the end of his regime and with no further bloodshed," she continued, noting Washington is eager for his ouster "as soon as possible."

The top U.S. diplomat spoke as she prepared to leave for a ministerial-level meeting of the U.N. High Commission on Human Rights on Monday, and for bilateral talks with many of her counterparts about the crisis in Libya.

The chaos engulfing the oil-rich North African state of 6.3 million has fanned fears that Gadhafi's hold on power could descend into civil war as the United Nations said nearly 100,000 people have streamed out of the country.

More than 1,000 people are believed to have been killed in a government crackdown on the protests.

"I think it is way too soon to tell how this is going to play out. We are going to be ready and prepared to offer any kind of assistance that anyone wishes to have from the U.S.," Clinton told reporters, noting Washington was in touch with the Libyan opposition.

Protest leaders established a transitional "national council" in eastern cities seized from the Gadhafi regime and called on the army to help them take the capital Tripoli.

Clinton also called on the Libyan regime to "call off the mercenaries," referring to the government-hired troops said to have been unleashed against anti-government protesters.

Two senior U.S. lawmakers urged Washington to recognize any transitional government and supply it with weapons and humanitarian assistance to oust Gadhafi, who has ruled Libya with an iron fist for four decades.

"We ought to recognize the provisional government as the legitimate government of Libya and we ought to give that government certainly humanitarian assistance and military arms ... to give them the wherewithal to fight on behalf of the people of Libya against a cruel dictator," Senator Joe Lieberman told CNN.

Lieberman was speaking alongside Republican Senator John McCain from Egypt, where a popular uprising swept president Hosni Mubarak from power earlier this month after nearly 30 years of autocratic rule.

McCain urged Obama, his former rival in the 2008 presidential campaign, to "get tough" and make it clear that Libyan officials involved in attacks on their own people would face prosecution for war crimes.

The war hero and former naval aviator also called for a no-fly zone over the country so that "Libyan pilots won't fly" and shoot on civilians.

But he stopped short of calling for a military intervention with ground forces in the oil-rich North African country, though he did not rule out that possibility.

McCain, who once praised Gadhafi's role as a peacemaker in Africa, predicted that the longest-serving Arab leader's rule would soon come to an end and that his "days are numbered."

"The question is how many people are going to be massacred between now and when he leaves. We ought to shorten that time frame as much as possible, and I believe we can," McCain added.

Lieberman, an independent who used to be a Democrat, said he understood the Obama administration's initial hesitation in speaking out strongly against Libya's crackdown due to concerns over the safety of U.S. citizens in the country.

But, he added: "Frankly I wish we had spoken out much more clearly and early against the Gadhafi regime ... The fact is now is the time for action, not just statements."

The U.N. Security Council has imposed a travel ban and assets freeze on Gadhafi's regime and ordered an investigation into possible crimes against humanity by the Libyan leader, the first time such a decision has been made unanimously.

On Friday, Obama announced unilateral sanctions targeting Gadhafi and his inner circle in a move intended to encourage defections and peel away loyalists defending the Libyan's 42-year rule.

Clinton has signed an order revoking the U.S. visas of Libyan officials and others linked to the violence against civilians. New visas will now be denied as a matter of policy.