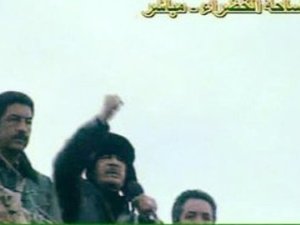 Libyan strongman Moammar Gadhafi on Sunday dismissed U.N. sanctions as invalid and claimed calm had returned to Libya as the territories held by the opposition were surrounded.

In a rare statement to foreign media broadcast on Serbian television, Gadhafi also blamed al-Qaida extremists for the killings since the anti-regime protests began around February 15.

"The Security Council adopted a resolution which is invalid in accordance with the U.N. Charter, it is void," Gadhafi told Serbian Pink Television in a 10-minute statement in Arabic that was dubbed in Serbian.

"How is it possible that the Security Council adopts a resolution based on a media report. It is unacceptable and goes against common sense," he said.

On Saturday the Security Council called for a travel ban and assets freeze against Gadhafi and his family and associates, and an arms embargo against Libya, where the U.N. says more than 1,000 people have been killed.

In his telephone statement to Serbian television the Libyan leader insisted the situation in his North African country was calm at the moment.

"There are no incidents at the moment and Libya is completely quiet. There is nothing unusual. There is no unrest," he claimed, adding that while people were killed on both sides it was only a small number.

He blamed al-Qaida extremists for the violence and repeated his claim that the opposition demonstrators were drugged.

"People were killed by terrorist gangs and they are without a doubt al-Qaida," he said.

Of the territory held by the opposition Gadhafi said: "There is a small group (of opponents) that is surrounded, but we will sort that out."

Mitrovic reportedly lent his private plane to Zoran Lilic, former Yugoslav president (1993-1997) and a personal friend of Gadhafi, to go to Tripoli to negotiate the evacuation of Serb nationals. Popovic said Lilic and the Pink news crew stayed in Tripoli for three days to see the situation and meet Gadhafi.

As one of the states that emerged from the former Yugoslavia Serbia has maintained friendly ties with Libya since the 1960s when Belgrade and Tripoli were prominent in the Non-Aligned Movement. In the 1990s when both Serbia and Libya were under international sanctions Lilic met Gadhafi frequently as an envoy of Milosevic.

Footage shown by Pink television before and after the Gadhafi's statement aired, focused on the alleged normality of daily life in Tripoli -- showing Gadhafi supporters, cars circulating in the center and people eating bread to counter reports that Libyans are going hungry.

Pink's reporter also commented that buildings that were reported as bombed were totally untouched.