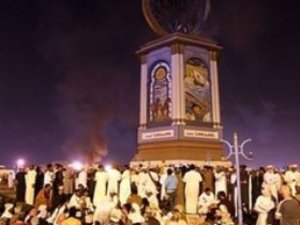 The protests in Sohar, more than 200 kilometers northwest of Muscat, prompted Sultan Qaboos to introduce swift appeasing measures, including the provision of jobs for 50,000 citizens and unemployment benefits.

Five people were also wounded when security forces opened fire on the demonstrators who tried to storm a police station in Sohar, the official said.

"Two were killed after being shot with rubber bullets as protesters attempted to storm a police station," the official said, requesting anonymity.

State news agency ONA confirmed there had been casualties in Sohar, saying police and anti-riot forces had clashed with demonstrators.

"Police and anti-riot squads confronted this group of wreckers in a bid to protect people and their property, which caused casualties," it said.

ONA said separately that riots began at dawn on Saturday and continued on Sunday, and that several government and private cars were torched.

The police post targeted by the protesters is near Earth Roundabout, where some 250 demonstrators have been staging a sit-in, witnesses told Agence France Presse.

The demonstrators have dubbed the intersection "Reform Roundabout," as they press for change in the Gulf state where Sultan Qaboos has been in power for four decades.

Police were nowhere to be seen in the area, an AFP journalist reported.

The protesters, who were mostly unemployed, have been demanding jobs, better salaries and measures to curb corruption, the witnesses said.

"These acts committed by a group of wreckers contradict the nature of the Omani society that is known for being moderate and balanced, and they clash with the basic state law and laws that provide for the protection of state" property, ONA said.

He ordered a monthly allowance of 150 riyals (390 dollars) for each registered job seeker, and he gave orders to provide 50,000 new jobs.

The 83-member body advises the government on economic and social issues but has no say in defense, internal security or foreign policy.

For decades the sultanate was an isolated country living on the margins of the modern world, but the 2010 U.N. Human Development Report released in November said Oman made the most improvement since 1970 out of 135 countries.

Previously, it had been largely spared the deadly turmoil sweeping the Arab world since Tunisian president Zine El Abidine Ben Ali was ousted in a popular uprising and the subsequent departure of Hosni Mubarak as Egypt's president.

But demonstrators in Oman do not want to topple their regime.

"We want his majesty Sultan Qaboos. It is the ministers that we don't want," said unemployed protester Mohammed al-Maamari, 23.

Yaaqoub al-Belouchi, 30, agreed that "people do not demand a change of regime, just a change of ministers."

"We are with Qaboos," said the businessman, adding that the protest would continue. "We will sleep at the roundabout."

Around 300 Omanis, including women, staged a peaceful rally in central Muscat on February 18 to demand an increase in salaries and political reforms.

It was the second rally of its kind in the sultanate in the past two months, after about 200 demonstrators took to the streets on January 17 in protest against rising prices and corruption.

Qaboos on Saturday announced an increase in the monthly allowance for students at universities and vocational schools.

ONA said he ordered a raise in the allowance of between 25 and 90 Omani riyals ($65 to $234) to "achieve further development and ... provide a decent living for his people."

He also ordered the creation of a consumer protection bureau, and was looking into opening cooperatives, it said.

Earlier this month, Oman raised the minimum wage for an estimated 150,000 private sector employees from $364 to $520 a month.