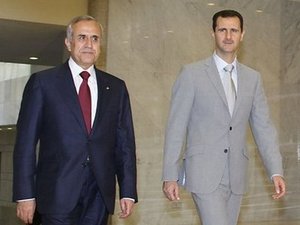 Syrian President Bashar Assad has reportedly warned his Lebanese counterpart Michel Suleiman from the dangers of international pressure to demarcate the border between the two countries while expressing readiness to start demarcation at sea.

Well-informed sources told As Safir newspaper in remarks published Thursday that Suleiman stressed during talks with Assad in Damascus on Tuesday on the need to demarcate the Lebanese-Syrian border.

However, the sources said that the Syrians were frustrated over the Lebanese president's insistence to bring up the subject several times because they believe that such a demand is the consequence of pressure exerted by Washington and U.N. special envoy Terje Roed-Larsen to monitor the border.

Insistence to demarcate the border is not seen by the Syrian leadership as a Lebanese demand, the sources told the daily. On the contrary, it is seen as a Western pressure on Damascus and Hizbullah to target the resistance.

The sources said Assad clearly informed Suleiman that Damascus did not mind to start border demarcation at sea.

They also said the Syrian president encouraged dialogue among the Lebanese to consolidate national unity.