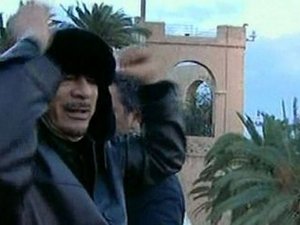 The European Union on Monday agreed to slap an asset freeze and travel ban on Libyan leader Moammar Gadhafi and 25 members of his family and inner circle, the EU's Hungarian presidency said.

"The EU measures not only implement the resolution of the United Nations Security Council of February 26 but in addition impose autonomous sanctions", said Tamas Fellegi, national development minister of Hungary, which currently holds the rotating EU presidency.

"The council of the EU banned the supply to Libya of arms, ammunition and related material, in addition to the U.N. measures.

"The council also prohibited trade with Libya on equipment which might be used for internal repression," he added.

A visa ban was decided against 16 people, including Gadhafi, members of his family "closely associated with the regime" and others "responsible for the violent crackdown on the civilian population" since February 16, he said.

"The council also imposed a visa ban on an additional 10 people," he said, without giving further detail.

The asset freeze will be implemented against Gadhafi and five members of his family as well as 20 others.

Speaking in Geneva earlier, the EU's foreign policy chief Catherine Ashton said the brutality of the regime called for an immediate response.

"What is going on -- the massive violence against peaceful demonstrators -- shocks our conscience," she said.

"It should spring us into action," she said.

The sanctions decided by the 27-nation bloc will come into force in several days.

Earlier Monday, the EU said it was trying to make contact with leaders of the Libyan opposition to Gadhafi as insurgents set up a transitional body in the east of the country.

Asked whether the bloc was ready to offer support to such a transitional authority, a spokeswoman for Ashton said: "We are now in the process of establishing contacts."

"This is an action that shows a willingness to work together," said Maja Kocijancic. "We support the democratic aspirations" of Libyan protesters, she added.

Protest leaders on Sunday established a transitional "national council" in eastern cities seized from the Gadhafi regime and called on the army to help them take the capital Tripoli.

The United States said it was prepared to offer "any kind of assistance" to Libyans seeking to overthrow the regime of Gadhafi.

In the eastern city of Benghazi on Sunday, a spokesman said consultations were underway to discuss the composition and duties of the new body.

"The creation of a national council has been announced in all freed cities of Libya," Abdel Hafiz Ghoqa told a news conference, stressing it should not be seen as a transitional government.

The council was the "face of Libya in the transitional period," he said.

"The council is not completely formed yet," said Ghoqa, speaking from Libya's second city, a stronghold of the opposition movement that launched the anti-regime protests on February 17.

He refused to disclose the names of the members of the council but said that former justice minister Mustafa Abdel Jalil -- who quit Gadhafi's regime this week -- would head the council in the eastern city of Al-Baida.