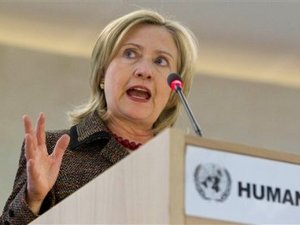 U.S. Secretary of State Hillary Clinton urged the international community Monday to work together on further steps to end the crisis in Libya, adding that Washington was keeping all options on the table.

"We all need to work together on further steps to hold the Gadhafi government accountable, provide humanitarian assistance to those in need and support the Libyan people as they pursue a transition to democracy," she told the U.N. Human Rights Council.

"We will continue to explore all possible options for action -- as we have said, nothing is off the table so long as the Libyan government continues to threaten and kill Libyan citizens."

Clinton noted that backing political transitions in the Arab world was not just a matter of ideals, but a "strategic imperative".

"The United States supports orderly, peaceful and irreversible transitions to real democracies that deliver results for their citizens," she told the council.

"On this our values and interests converge. Because supporting these transitions is not simply a matter of ideals. It is also a strategic imperative," she added.

The transition process "must be protected from anti-democratic influences," stressed Clinton.

"Political participation should be open to all people across the spectrum who reject violence, uphold equality, and agree to play by the rules of democracy," she said.

Clinton expressed hopes that military leaders in Egypt will "reach out to a broad array of opposition voices and representatives from civil society to ensure that the reform process in the country is transparent and inclusive, leading to free and fair elections."

"Egyptians are asking for concrete steps in the run-up to elections, including enacting constitutional reforms, releasing political detainees, and lifting the state of emergency," she said.

The United States was ready to lend the Egyptians support, added Clinton.