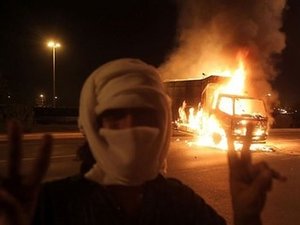 Fresh clashes erupted between Omani police and protesters on Monday, a day after police killed at least one as the turmoil rocking the Arab world reached the normally calm Gulf sultanate.

Hundreds of demonstrators stormed a police station in the key industrial area of Sohar, northwest of the capital Muscat, and police responded by firing tear gas.

There were no immediate reports of casualties in the clashes that broke out near Earth Roundabout, a key intersection on the main road to the capital, where deadly violence erupted on Sunday, an Agence France Presse correspondent reported.

The protesters, who are demanding jobs and political reform, continued to man roadblocks around Sohar despite the announcement by the authorities of new benefits for the jobless and more powers for an elected advisory council.

The protesters have been keeping a vigil at Earth Roundabout for three straight days, defying police efforts to remove them.

Some 700 protesters also blocked access to the town's port -- Oman's second biggest -- on Monday, preventing the movement of vehicles in or out, an AFP correspondent reported.

They seized several trucks with which they blocked the entrance.

The protesters called for "the trial of all ministers" and "the abolition of all taxes," including taxes on health care and on lands offered by the state.

There were conflicting reports on the death toll from Sunday's clashes.

A security official had told AFP on Sunday that police killed two people and wounded about five others when they fired rubber bullets and tear gas at demonstrators attacking a police station near the roundabout.

The protesters gave a higher toll.

"I saw five killed at the police station yesterday," said one of them, 25-year-old Abdullah al-Meqbali.

A government spokesman cited by the state ONA news agency said on Monday that only one person was killed, and Health Minister Ahmed al-Saeedi gave the same figure in an interview with the Al-Jazeera satellite channel.

He said a second person had survived despite suffering a bullet wound to the stomach.

ONA news agency said rioting had begun at dawn on Saturday and continued on Sunday. It said several government and privately owned cars had been torched.

The protesters also set fire to the governor's house in Sohar, more than 200 kilometers from the capital, and an AFP correspondent said a shopping mall had been torched.

Oman is the latest country to be hit by a wave of protests in the Arab world that has already swept the veteran leaders of Tunisia and Egypt from power. Mass demonstrations also threaten the regimes of Bahrain, Libya and Yemen.

The Omani protesters insist they are not challenging the rule of Sultan Qaboos, who has been in power since 1970, but are merely calling for jobs and reform.

Mohammed Mohammed, who said his brother Abdullah Mohammed, 36, was killed by police on Sunday, told AFP the family would not bury him until the killers are put on trial.

"We will not take the body (from the mortuary). We want to know the killer, and the reasons behind the killing ... and we want him to be punished according to law," he said.

Mohammed said his brother was killed by live fire and not rubber bullets as officials had stated.

In a move towards addressing the grievances of the protesters, Qaboos announced 50,000 new jobs would be created for Omani citizens and benefits provided for the unemployed.

A royal decree carried by ONA on Sunday said a monthly allowance of 150 riyals (390 dollars) would be given to each registered job seeker.

Amid the tensions in Sohar, Oman's stock market index slumped by 7.8 percent on Monday to its lowest level in more than a year.

The sultanate lies on the strategic Strait of Hormuz and adjoining Gulf of Oman, through which much of the world's oil supplies pass, and is a key Western ally in the region.