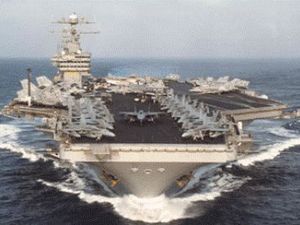 The United States on Monday told defiant Libyan leader Moammar Gadhafi he must "go now," repositioned forces near Libya and raised the prospect of exile for its foe, as it cranked up pressure on his fragile regime.

Washington further stiffened its rhetoric and said it was talking to Libyan opposition groups, apparently seeking to further destabilize Gadhafi after an uprising against his decades-long rule that has killed more than 1,000 people.

U.S. President Barack Obama meanwhile planned a meeting with U.N. Secretary General Ban Ki-moon later Monday as officials mulled whether to back calls to impose a "no-fly" zone over Libya to protect civilians.

Secretary of State Hillary Clinton led the U.S. diplomatic thrust in Geneva at the U.N. Human Rights Council and in meetings with global foreign ministers, in a markedly more abrupt tone than that used by Washington before it evacuated groups of Americans from Libya last week.

"The people of Libya have made themselves clear: it is time for Gadhafi to go -- now, without further violence or delay," Clinton told a meeting of the Geneva-based council.

"Mercenaries and thugs have been turned loose to attack demonstrators.

"There are reports of soldiers executed for refusing to turn their guns on their fellow citizens, of indiscriminate killings, arbitrary arrests and torture.

"Colonel Gadhafi and those around him must be held accountable for these acts."

The Pentagon, meanwhile, said it was moving naval and air forces into position near Libya, as Western countries weigh possible military intervention.

"I think it's safe to say as part of that we're repositioning forces to provide for that flexibility once decisions are made."

Clinton however cautioned that though Washington believed there would be a need for humanitarian intervention in the crisis, no military action was imminent.

"We expect to see Libyans and others trapped in Libya which presents a great danger on the high seas. But there is not any military action involving U.S. naval vessels," she added.

The White House also ratcheted up pressure on Gadhafi's government, as he faced opposition attacks and appeared to lose more territory to internal foes.

White House spokesman Jay Carney said "exile" was "one option" that would satisfy U.S. demands for Gadhafi to go, amid an uprising against his rule.

But he would not say whether the United States would be prepared to facilitate any departure from Libya for Gadhafi.

"Exile is certainly one option for him to affect that change," Carney said when asked whether the United States would back a solution to the crisis that saw Gadhafi leave his country.

The White House also said that Washington was also in discussions about the feasibility of operating a "no fly" zone over Libya to protect civilians from airborne attacks by forces loyal to Gadhafi.

"We have said that a 'no fly zone' is an option we are actively considering, discussing with allies and partners," Carney said.

A senior U.S. administration official however said that the issue was a "small element in discussions among Clinton and other foreign ministers in Geneva and was not a "dominant theme" of the discussions.

Carney also said Washington was in touch with various factions of the Libyan opposition but said it was premature to start talking about recognizing one group or the other.

On Sunday, Clinton said that Washington was prepared to offer "any kind of assistance" to Libyans seeking to overthrow Gadhafi.

"We are just at the beginning of what will follow Gadhafi," she said Sunday.

In Geneva, U.S. officials meanwhile said that the United States would send teams to Libya's borders with Egypt and Tunisia to help with what may turn out to be a major refugee crisis.

A senior official said on condition of anonymity that Washington was also setting aside funding for humanitarian aid.