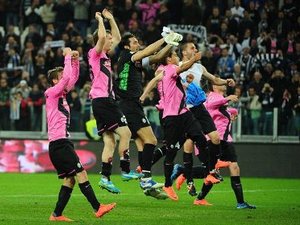 Undefeated Juventus closed the gap to AC Milan at the top of the Serie A table to just two points with a 3-0 win over Napoli in Turin on Sunday.

Leonardo Bonucci, Arturo Vidal and Fabio Quagliarella scored the goals as Juve capitalized on Milan's 1-1 draw at Catania the day before.

It also maintained their unbeaten run this season, which now stands at 34 games in all competitions.

"It's a crucial victory because it all but wraps up second place and that's already amazing given where we started," said Juve coach Antonio Conte.

"We'll keep an eye above us because that's only right as should Milan slip up we have to try to be ready. But it's Milan's to lose."

They also had Juan Zuniga sent off late on for elbowing Giorgio Chiellini.

Their main problem, though, was being guilty of giving away too many free-kicks in potentially dangerous positions.

The opening goal came early in the second period and was due in no small part to luck, although Napoli were finally made to pay for their ill-discipline.

Andrea Pirlo swung over another free-kick that Andrea Barzagli mishit, the ball falling to Mirko Vucinic, who crashed a shot off Bonucci's chest and past a stranded Morgan De Sanctis.

Now able to hit Napoli on the counter, Juve made their visitors pay as Vidal turned Hugo Campagnaro inside out and smashed a shot across De Sanctis.

Quagliarella then beat the goalkeeper at his near post with a fierce shot seven minutes from time.

With Roma romping to a 5-2 win over Novara earlier in the day, Inter needed a victory to keep in the hunt for a Europa League spot.

They now trail Roma, who are sixth and occupy the final European berth, by three points with eight games left.

At 36, Stramaccioni may be the youngest coach in Inter's history but he turned to experience for his first game in charge, restoring the likes of Esteban Cambiasso and Cristian Chivu to the starting line-up.

And the old guard rewarded him as Diego Milito hit a hat-trick against his former employers, while Walter Samuel and Mauro Zarate added the other two.

Alberto Gilardino scored a brace from the spot for the visitors, with Emiliano Moretti and Rodrigo Palacio -- also with a penalty -- adding the others.

It was a game that had four penalties and two red cards, with Inter goalkeeper Julio Cesar and Genoa's Fernando Belluschi both dismissed.

"The important thing is that we won. Certainly it was an explosive victory, maybe even a bit too much so for (president Massimo) Moratti," said Stramaccioni.

Having failed to score in seven of their last 10 league games, of which they only won one, under Claudio Ranieri, Inter were greatly helped by the league's worst defense.

Roma's easy victory mean they trail city rivals Lazio, who lost 3-1 at Parma on Saturday, by just four points in the race for third place and the final berth in Europe's premier club competition.

Novara took the lead early on through Andrea Caracciolo but after that there was only ever going to be one winner.

Brazilian Marquinho and Pablo Osvaldo hit back before half-time, while another Brazilian, Fabio Simplicio, and Bojan Krkic struck in the second period.

Japan forward Takayuki Morimoto scored a late consolation for the struggling visitors, who remain second-bottom and nine points from safety, before Erik Lamela put the icing on the cake deep into injury time.

Udinese could not capitalize on Lazio and Napoli's slips as they lost 1-0 at lowly Siena and stay fifth.