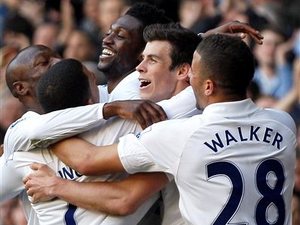 Tottenham Hotspur manager Harry Redknapp is expecting the battle for Champions League places to go right to the end of the English Premier League season.

Tottenham's 3-1 win at home to Swansea left them level on points with third-placed local rivals Arsenal and occupying the fourth and final spot on offer to English clubs.

"It's going to be tight," Redknapp said. "I wouldn't write Chelsea off, I wouldn't write Newcastle off - they've done a miracle as well - and Arsenal obviously are there.

"It's going to be interesting but that's what football is about. That's what supporters want -- they want excitement. It's going to be a great end to the season," added Redknapp, the favorite to succeed Fabio Capello as England boss.

Tottenham were 1-0 up at half-time thanks to Rafael van der Vaart's early opener before Gylfi Sigurdsson, on loan from German club Hoffenheim, equalised for Swansea.

But Spurs secured a first league win in six games thanks to late headers from striker Emmanuel Adebayor, on loan from title contenders Manchester City.

"I thought we were fantastic first half," said Redknapp. "The players did everything we asked - pressed and closed and had all the chances really.

"They (Swansea) started well, the first 10 minutes, and then we got after them all over the park and broke their game up. They're a good side, they play fantastic football but I don't think we really let them play in the first half.

"There was going to be a spell where they would come into it because to keep closing like we did in the first half, it's difficult to keep that momentum going and they came back into it but we came back strong again. It was a fantastic performance."

Wales winger Gareth Bale proved a thorn in Swansea's side, as he's been to so many opposition teams this season, and Redknapp said: "He's just an amazing talent, an amazing player.

"He's got the ability to run all day, to beat people, to dribble, shoot, to head it... he's a unique player, a special talent.

"Everybody today I thought was on their game. We defended well, got blocks in, the midfielders all pressed well and obviously Manny (Adebayor) getting two goals as well was great for him."

Victory completed a successful week for Tottenham following a goalless draw with Chelsea and a 3-1 FA Cup quarterfinal win over Bolton.

"We've been playing well," Redknapp said. "It's been a good week. We went to Chelsea last week and played ever so well. I felt we could have won the game, which is never easy going to Stamford Bridge and getting a result like that.

"We came back home and played well against Bolton in midweek, and today again so it's been a good week."