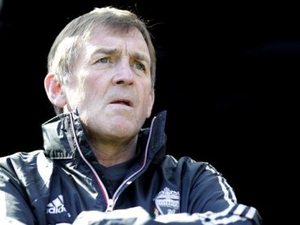 Liverpool manager Kenny Dalglish has accepted there are problems within his side after they slumped to a sixth defeat in seven Premier League matches at Newcastle United.

But the 61-year-old Anfield great has insisted he will stay calm in a bid to get the Reds back on track ahead of their FA Cup semi-final date with Merseyside rivals Everton on April 14.

Dalglish will have to make do without goalkeeper Pepe Reina for that game after the Spain international was sent off in the closing stages of the 2-0 defeat at Newcastle's St James' Park on Sunday.

It was a troubled afternoon for Liverpool, who ended up with former Newcastle defender Jose Enrique in goal and saw another ex-Magpie, striker Andy Carroll, direct his frustration towards his boss before disappearing up the tunnel after his second-half substitution.

Dalglish, whose side face Aston Villa at Anfield on Saturday and travel to Blackburn Rovers before their Wembley clash with Everton, said his players had to use their frustration to their advantage.

"We've got to try and remain calm and sort out the problems that we have to get ourselves back to the way that we want to be playing," said Dalglish of a Liverpool team who've already won the League Cup this season.

"I don't think it's a problem with confidence. We've got to stick together and believe in what we're doing," the former Liverpool and Scotland striker, now in his second spell as Reds manager, said.

"It's not as if they don't work hard and don't have the determination and effort to put it right.

Carroll's annoyance was symptomatic of a shambolic afternoon for the visitors as his replacement on Tyneside, Papiss Cisse, scored both goals for United.

The former Newcastle striker had earlier been booked for a 10th-minute dive when tumbling inside the penalty area.

Dalglish, though, refused to criticize his £35 million ($56 million) signing for that incident or his reaction to being brought off 10 minutes from time.

"When Andy came off and went up the tunnel he was disappointed with the way the game had gone, not necessarily for himself but for the team," he said.

"The frustration took him up into the dressing room. We don't have a problem with people showing their disappointment, desperation of frustration," Dalglish, a former Newcastle manager, added

"I had no qualms either about when Andy went down with the goalkeeper. It wasn't a penalty kick but I thought Andy was losing his balance anyway before he reached the goalkeeper."

Reina was sent off in the 85th minute after appearing to headbutt James Perch, the Newcastle defender.

He will now serve a three-match ban, meaning Brazilian keeper Alexander Doni -- signed from AS Roma in July -- looks set to make his Liverpool debut.

"Pepe got a deserved red card," said Dalglish. "There was a bit of remorse there (when I spoke to him after the game)."

Sunday's defeat left Liverpool eighth in the Premier League, 11 points adrift of sixth-placed Newcastle, who still have a chance of qualifying for next season's Champions League.

"He's a player with a special talent," Pardew said of the 25-year-old.

"Nothing would give me more pleasure for him to make the French squad and I think he can.”