Barcelona in Danger ahead of Champs League 2nd Leg 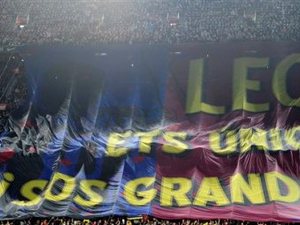 Victory is the only option for Barcelona as the reigning champions welcome AC Milan to the Camp Nou in the most finely balanced of the Champions League quarterfinals this week.

With Real Madrid and Bayern Munich all but through to the semifinals and Chelsea also in a great position to progress after a first-leg away win, most attention will be on Tuesday's return match between two continental heavyweights.

Milan kept Barcelona and its peerless forward Lionel Messi scoreless in a Champions League match for the first time in two and a half years in the 0-0 draw in the first leg.

If Barcelona is going to stay on course to retain the Champions League title, the Spanish team has to rediscover its attacking fluency against a side that drew 2-2 at the Camp Nou in the group stage.

"We have to win, that's the reality," Barcelona playmaker Andres Iniesta said. "At home, in front of our fans, we should go through so we should approach it with confidence."

With Messi in the team, there will always be hope.

His goal in the 2-0 win over Athletic Bilbao in the Spanish league on Saturday was his 56th in all competitions this season — the most for a player in a major European league since Germany great Gerd Mueller scored 67 for Bayern Munich in the 1972-73 campaign.

Barcelona is unbeaten in 11 matches — with the result at the San Siro its lone draw — during a run in which it has outscored opponents 33-8.

Pep Guardiola's team hasn't lost at the Camp Nou for 51 games, dating back to September 2010, yet Milan midfielder Alberto Aquilani believes it is all to play for in the second leg.

"We've got plenty of chance against Barcelona," Aquilani said. "The first leg showed that there's not much difference between us and them."

Mark van Bommel is out with a back injury for Milan, which drew 1-1 at Catania on Saturday, while goalkeeper Christian Abbiati and midfielder Antonio Nocerino should be fit despite being seen limping after the match.

Midfielder Cesc Fabregas and defender Carles Puyol were rested against Bilbao, while Brazil fullback Adriano trained normally with the team on Sunday after an injury.

The winner of the Barca-Milan match will likely play Chelsea, which holds a 1-0 lead over Benfica heading into the second leg at Stamford Bridge.

The English club, which has never captured the Champions League and may need to win it to qualify for next season's competition, has won all five home games in the 2011/12 edition — scoring 14 goals and conceding only one.

"I think our worst enemy can be ourselves, thinking that we have done the most difficult part," said Chelsea forward Salomon Kalou, who scored the first-leg winner and has been rejuvenated under interim manager Roberto Di Matteo. "We have to keep going, working hard. We have to try to score early and secure the victory at home."

A potential semifinal between Madrid and Bayern looms unless there is a major upset in their second-leg matches.

Madrid holds a 3-0 cushion over unheralded Cypriot team APOEL Nicosia, whose historic run to the quarterfinals has thrilled neutrals but came to a shuddering halt last week against the Spanish powerhouse and nine-time European champion.

Madrid is on the verge of reaching its second straight Champions League semifinal under coach Jose Mourinho, who is bidding to become the first coach to win the competition with three different teams.

Madrid is unbeaten in 16 overall, with 12 of those victories, while star forward Cristiano Ronaldo has 47 goals for the season.

"The team we have is spectacular, we have to continue this way right to the close, including in the Champions League," Ronaldo said. "We're scoring a lot of goals and we're in great shape."

Argentina forward Angel di Maria could feature after coming on as a late substitute in Saturday's 5-1 win over Osasuna for only his second appearance of 2012.

Bayern Munich also has one foot in the semifinals after a 2-0 win in Marseille in the first leg thanks to goals from Arjen Robben and Mario Gomez — his 11th of the competition.

"The job isn't done yet," warned Franck Ribery, who played two seasons for Marseille before his transfer to Bayern in 2007. "We can't already think we're playing against Madrid ... no, no."

Bayern picked up five yellow cards in the first leg, including one for Bastian Schweinsteiger which rules him out of Tuesday's match.