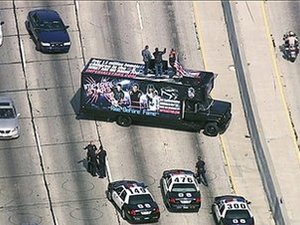 A rock band will have to face the music after blocking a Los Angeles freeway and performing atop its trailer.

The driver took the keys and fled in another car, then three musicians climbed on top of the van and began to perform.

Quintero said they were arrested and the truck was finally towed away around noon after causing a mile-long traffic jam.

Quintero said the musicians could face charges of obstructing traffic.

The group, whose credits include "Traffic Jam 101," said on its website it is dedicated to helping homeless children.(AP)

Artciels like this are an example of quick, helpful answers.