Libyans 'Ready to Die for Me', Says Gadhafi 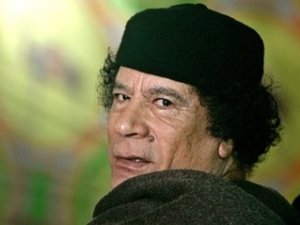 "All my people love me," Libyan strongman Moammar Gadhafi insisted Monday, ignoring mounting global pressure to step down and perhaps head into exile after four decades at the helm of his country.

"They love me. All my people with me. They love me all. They would die to protect me," the veteran Libyan leader said speaking in halting English in an interview with Western media shown on the BBC's world news website.

"No demonstrations at all in the streets," claimed Gadhafi, who has ruled his north African country for more than 41 years. "No one is against us, against me for what?"

Gadhafi sat down for the interview with ABC television channel as well as the BBC and The Times of London as world powers ramped up pressure on his regime.

There has been global outrage at a brutal crackdown on opposition demonstrations against Gadhafi's regime which erupted nearly two weeks ago in the wake of the upheavals in its neighbors Egypt and Tunisia.

Pro-democracy forces now control vast swaths of the east of the north African country, but rights groups say at least 1,000 people have been killed in the crackdown.

After initially groping for a response, the United States has now openly called for Gadhafi to step down, suggesting he should go into exile.

"The people of Libya have made themselves clear: it is time for Gadhafi to go -- now, without further violence or delay," U.S. Secretary of State Hillary Clinton told a U.N. Human Rights Council meeting on Libya in Geneva.

White House spokesman Jay Carney said "exile" was "one option" that would satisfy U.S. demands for Gadhafi to go, amid the uprising.

But Gadhafi hit back, saying he had been betrayed by the United States.

"I'm surprised that we have an alliance with the West to fight al-Qaida, and now that we are fighting terrorists they have abandoned us," he said, according to ABC television.

"Perhaps they want to occupy Libya," ABC quoted him as saying, adding Gadhafi had insisted he could not step down because he is neither a president nor a king.

He also challenged those who have suggested he has stashed money abroad to produce evidence of such funds and said he would "put two fingers in their eye," the BBC reported.

The BBC's Jeremy Bowen said the interview had taken place in a restaurant in the Libyan capital, Tripoli, and Gadhafi had seemed relaxed throughout.

Gadhafi also alleged the people who had come onto the streets were under the influence of drugs supplied by al-Qaida. He added people had seized weapons and that his supporters were under orders not to shoot back.

But witnesses said Gadhafi's forces had hit back Monday, with fighter jets bombing ammunition stores in the eastern town of Adjabiya, around 100 kilometers south of the capital Tripoli.

The brutal crackdown on opposition protests has killed at least 1,000 people and set off a "humanitarian emergency," the U.N. refugee agency UNHCR has said, warning of a mass exodus from Libya.

Faced with the threat of massacres or a wave of refugees on their Mediterranean flank, senior Western officials, including France's Prime Minister Francois Fillon, were Monday weighing military options.

"We're studying all options to ensure that Colonel Gadhafi understands that he has to go. I know that people have mentioned military solutions, and these solutions are being examined by the French government," Fillon said in an interview with RTL radio.

One option on the table was using NATO air power to impose a no-fly zone over Libya to stop Gadhafi from using air strikes against his own people. However, such a step would require U.N. approval, experts said.