Bayern's Robben to Extend Deal until 2015 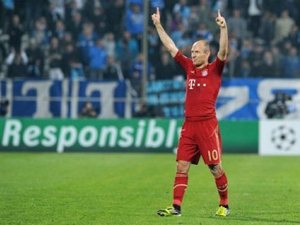 Bayern Munich's Dutch star Arjen Robben is set to sign a contract extension to keep him in Bavaria until 2015, according to a report in the German daily Bild on Monday.

The 28-year-old, who signed from Real Madrid in August 2009, has a contract until 2013 but according to the tabloid he will sign an extension deal at the end of April, keeping him in Munich for at least three more years.

He is expected to sign the new contract after Bayern's final home league match of the season against VfB Stuttgart on April 28.

Robben has been in fine form for Bayern with 11 goals in the German league and three in the Champions League which have proved crucial in the last week.

He scored the winning goal against Nuremberg on Saturday which leaves Bayern just three points behind Bundesliga leaders Dortmund.

And his second-half goal sealed Bayern's 2-0 quarter-final win at Marseille last Wednesday puts the German club on the verge of the Champions League semifinals ahead of Tuesday's second leg in Munich.