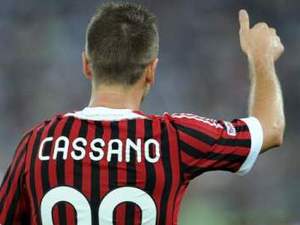 Milan says a panel of experts gathered by the Italian Sports Medicine Federation judged Cassano's condition to be "favorable."

Cassano still has to wait for the definitive go-ahead, which will come from Milan's own medical institute.

The player was hospitalized after falling ill with stroke-like symptoms on the team plane following Milan's 3-2 victory at Roma on October 29, then had surgery six days later to repair a small cardiac malformation.

He resumed training on his own in January and with his teammates Thursday, although time is running out for him to make Italy's European Championship squad.